Well, you might have a shimmering car, and the look and persona that goes with it, but you might have to pay a dear price for lack of common sense, and a Chinese couple learned that the hard way ( I hope they learned something, the look reported on their faces said otherwise!) The couple was riding an Infiniti G-37 convertible spotting a gold wrap. Probably in a bid to show off, the couple parked the car on the sidewalk and just got off to stand and stare.

You see gold or not, cars cannot be parked at a sidewalk, which was why the traffic police was on the scene. They wasted no time in get the car towed away, as the car apparently didn’t even have a license plate. Well then common sense is not so common after all! 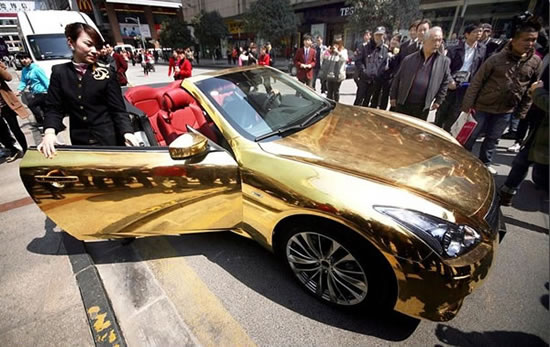 Tags from the story
Chinese, Gold-Plated