Those car enthusiasts with a strong memory might recall the Arash AF10, a prototype supercar displayed at the 2006 London Motor Show. Come November, and this car will be back in the spotlight as the company is now finally ready to unveil the first production version of the AF10 to the world. The supercar will make its world debut at the 2010 MPH The Prestige & Performance Motor Show. The car, which lacks the design appeal of its contemporaries like the Ferrari Enzo, manages to catch your eye. Although first envisioned to be an affordable supercar, the car now boasts a starting price of £620,000 (approximately $957,000).

The British-built supercar boasts a carbon fiber body and chassis, which have helped keep the car lightweight, ensuring it doesn’t weigh more than 2,645 pounds. Powered by a Corvette Z06-sourced LS7 7.0-liter V-8 engine, the AF10 churns out 550 horsepower and 475 pound-feet of torque. Other features include a six-speed manual Graziano gearbox. What is more, Arash says only 70 cars will be built in the next five years, making this car not just expensive but super exclusive as well.
Arash hopes the car will give stiff competition to other small-scale supercar manufacturers, such as Koenigsegg and Pagani. In fact, so confident is Arash about the success of this production model that they have even planned a supercharged ‘AF10S’ model for the near future. The high powered variant will reportedly churn out 800 horsepower and 553 pound-feet of torque. There are also plans to develop a cheaper model, the AF8, a less powerful version of the AF10.
The MPH the Prestige and Performance Motor Show is slated to begin on November 4th at Earls Court, London. 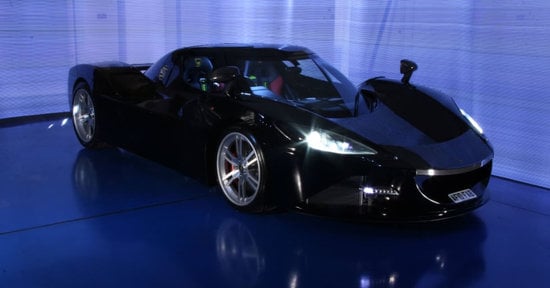 Tags from the story
Prototype, Supercar