Seeing is not believing; but in this case even though this picture seems unreal it very much is real. In this picture is captured the moment that has a brand-new 55-foot Carver Marquis costing 1.5 million dollars. I can only imagine the plight of its owner who was supposed to receive this beauty at Dubai’s Port Jbel Ali on March 7. I wish his expression was also captured as it would have been quite a rage too. But I don’t think he suffered a stroke or anything for if he can afford this Yacht he can afford loosing it to Mother Nature too; nevertheless my heartfelt condolences to him!

READ:  Desta maxiyacht is the latest from Ferretti Custom Line 100

The yacht feel off its sling while being loaded into a cargo ship for delivery and the man aboard fell too but was safe! I think the only looser in this story is the man waiting for his boat in Dubai! 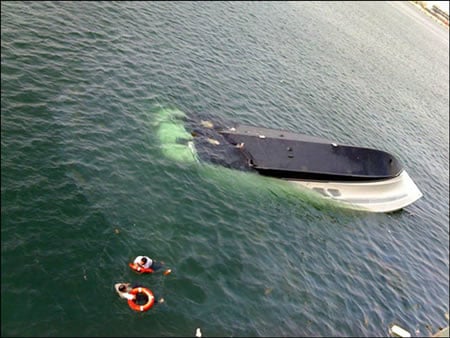