Most people would be happy enough to stand out from the usual traffic with such cars as the Rolls Royce Phantom or even Bugatti’s Veyron. But Nigo, the maker of clothing label ‘Bathing Ape’ (BAPE) begs to differ! With that vivid pink hue, the Veyron looks like a ‘bathing ape’ has walked all over some Barbie car. At least this repainted Veyron has remained true to Bugatti’s two-tone rule: the side panels get a rather unique pink and purple camo job, while the hood and rear panels are in solid Pepto pink. 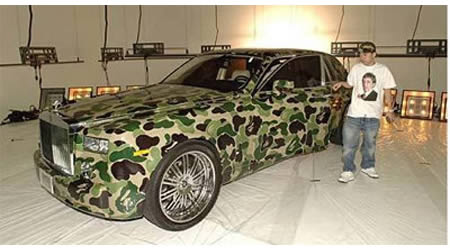 The Phantom, on the other hand, receives a camouflaged look. Fortunately the cars haven’t been painted; it’s just a vinyl wrap covering their body cases. We genuinely hope that the famous Japanese designer keeps away from designing cars!
Source

A spaceship for the seas – This radical 360-foot superyacht concept has its own hammam, submarine, beach club and a lot more