A few weeks back, Stellantis announced it will debut several new exciting concepts at the 2023 CES, which included something with a Chrysler badge. Now we finally what the American brand was hinting at. Chrysler has chosen the world’s biggest tech conference to preview the next-generation infotainment technology, making it the first Stellantis brand to do that. Based on the upcoming Stellantis electric vehicle platform, STLA, it includes a pair of massive infotainment displays that span the entire length of the dashboard, stretching from pillar to pillar. The cutting-edge infotainment system is part of Chrysler’s new two-seater cockpit concept called the Chrysler Synthesis cockpit. Interestingly, the concept is presented without a body and is entirely focused on the next-generation infotainment system along with the related technologies. 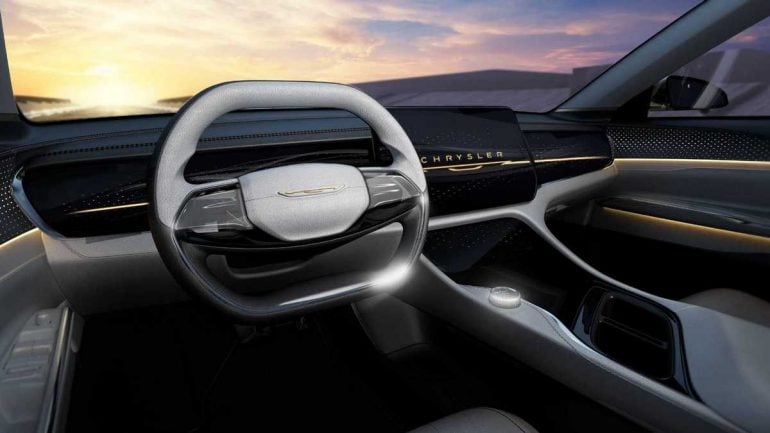 As seen in the design renderings released by Chrysler ahead of the official unveiling, the infotainment system has two giant screens stacked one above the other. The two massive glass sections measure 37.2 inches wide and cover the entire dashboard. While the infotainment screens are getting bigger by the day, only the 55-inch gigantic Mercedes-Benz MBUX Hyperscreen seems comparable in terms of its size. But there’s a big difference; while the MBUX Hyperscreen is already available as an option on the EQS, Chrysler’s infotainment system is still a concept with no word on its launch. Another interesting thing is that the concept is missing a steering wheel, which suggests it is aimed at full self-driving. Chrysler says the STLA platform will offer level three autonomous driving, allowing drivers to take their hands off the wheel and their eyes off the road.

Chrysler has also said that the next-generation infotainment system will make use of advanced AI technology to learn owner preferences over time. It will also get over-the-air updates to constantly keep the “STLA Brain” updated. It will also feature a virtual assistant that will work in the car and outside of it and help the owner in all aspects of life, which includes analyzing calendars to suggest driving routes, recommending parking and charging locations, connecting to a smart home, and assisting with e-commerce services. The first all-electric Chrysler is planned to be introduced in 2025, while will offer a fully-electrified lineup by 2028.

Tags from the story
CES