Like being able to witness the world’s fastest yacht wasn’t good enough they actually got one of the best designers to do up the interiors. It surely doesn’t get better and bigger than this and we are not complaining. I am talking about a legend from the maritime community which is reborn through the vision and tremendous creativity of internationally acclaimed fashion and perfume designer, Thierry Mugler. Gentry Eagle is one sought after a yacht with such creative and renowned people lending their creative visions to add to its beauty. It has also been immortalized in the pages of history with racing legend Tom Gentry setting nearly every powerboat speed record. This monumental vessel shattered the transatlantic crossing record in 1989 completing the journey from Ambrose Lighthouse at the entrance to New York Harbour to Bishop Rock on England’s Isles of Scilly 62 hours & 7 minutes. In his victory, Tom, along with Norman Gentry, took the Blue Ribbon away from the British airline and music tycoon Richard Branson of Virgin. The vessel has an impressive 11,500 horsepower and a top speed of 73 mph. She measures 112′ in length and is fitted with twin 3,480 horsepower MTU turbo types of diesel coupled with a 4,500 horsepower turbine combined to propel her to over 63 knots (70+ mph). Fuel capacity is 9,800 gallons with a cruising range of 1,500 nautical miles.

If that was way to technical for you then lets get back to more understandable stuff. Weyves Couture has surely done its best by having this collaboration of a lifetime and the results are for all to see and still find it difficult to believe. Cant blame them, marriage of this American nautical glory with one of the world’s most acclaimed designers, Thierry Mugler will require more than just seeing and believing. He has always done things in an extravagant fashion and his work is truly exceptional and widespread too. He has made his mark as a noted couturier, a perfume creator, a photographer, and video artist and who can forget Angel, his perfume, one of the best sellers worldwide. Kudos to Gentry Eagle, Thierry Mugler and Weyves Yachts. The seas are waiting! 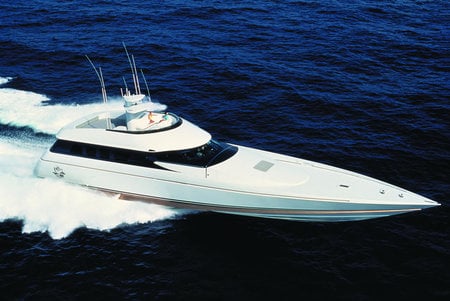 This adorable four-month-old kitten is the newest resident of the Parisian hotel Le Bristol.

Father of evolution, Charles Darwins’s 200-year-old microscope may sell for an estimated $480,000 or more…

Kim Kardashian’s Skims may be collaborating with Fendi for ultra-fancy $1,000 shapewear.