Okay, you car nuts. Here are some more juicy details about Bugatti’s of open-air Veyron beauty. So far you were only told that the convertible would have a Targa top and would begin production in 2009. But now there is some more juicy information available on the car! According to AutoExpress, the Targa Veyron will use the same 6.0L W16 as its fixed-roof counterpart, but the removal of the roof section will cost buyers a little extra. While the “standard” Veyrons lists from £840,000 ($ 1.652,838 USD), look for the Targa version to start at about £900,000 ($1,771,015 USD) .However, the extra cost won’t get you any extra performance. In fact, the Targa version will be slightly slower than the coupe, due to the need to reinforce the car’s chassis for lack of a solid roof structure. However, slow in Bugatti’s terms means a top speed of 217 mph.

A former Bugatti executive told Automotive News that the supercar maker had to do with a targa top instead of a conventional soft top “because there was no other solution which could fit with its safety cage. “There will be no storage compartment for the roof in the Veyron – meaning open air driving will have to be planned in advance — but it has also been reported that targa models will include a makeshift soft top for emergencies. Salivating to see this beauty aren’t you? Well, we should see the open-top Veyron at one of 2009’s major auto shows. 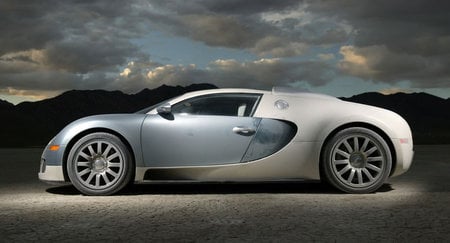