Disney fans eagerly anticipating the new Disney themed liners’ launch can start celebrating as the dream cruise is slowly and steadily materializing. The latest ship from Disney Cruise Line, which offers travelers Disney-themed cruise holidays, took a step close to reality this last week as the keel of Disney Dream, one of two brand new ships built by the company, laid at a shipyard in Papenburg, Germany. Each new liner from Disney Cruise Line will boast of 1,250 cabins and a tonnage of 128,000. 80 blocks will form Disney Dream, with the first block weighing in at approximately 380 tons.

At the keel-laying ceremony at the Meyer Werft shipyard in Papenburg, the Disney Cruise Line President Karl Holz said, “Our fleet expansion will allow us to satisfy demand on both the East and West coasts of the United States while also giving us the flexibility to explore additional global destinations for our guests.” Going by the maritime industry tradition, a coin was placed under the keel for good luck. And considering Disney, we definitely expected no ordinary coin. And our faith was proved right when we heard that the coin that was placed as a ‘Pixie Dusted’ one.
The Disney Dream liner will officially launch in 2011, closely followed by another new vessel, Disney Fantasy, in 2012. The designs are scheduled to be unveiled in autumn. Both Disney Dream and Disney Fantasy will be based in Port Canaveral in Florida and itineraries for the first ship will be released next month. 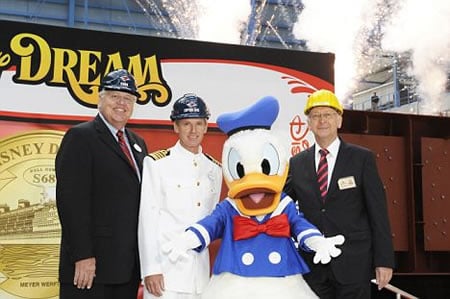