It isn’t every day that many Bugatti Veyrons go zooming by and eventually are halted by the local police. A French countryside recently enjoyed a spectacular view of eight Bugatti Veyrons lined up after being stopped by the police. Spotted by a hypercar aficionado Achilles Durlinger, these cars together cost a total value of nearly 140 million Euros (approximately $18139800). The identities of the drivers or owners of these cars, however, weren’t revealed. Each of these mid-engined cars can touch speeds of up to 407 km/h (253 mph), the highest speed currently attainable by a street-legal car. Also, these Bugattis capture in France weren’t reported to be speeding, so we’re guessing the police are fans of these roaring beasts, too, and just wished for a closer look!

READ:  Inside the largest Bugatti showroom in Europe 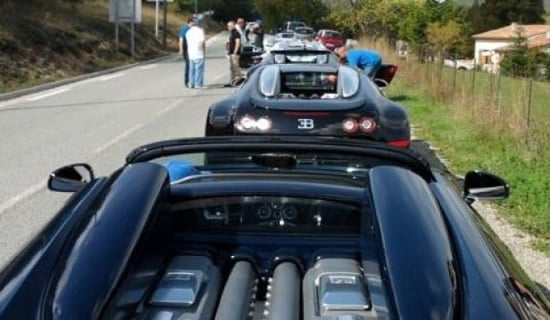