Customizing emotions for 25 Years, that is what GEMBALLA stands for. German-based Gemballa has been offering its expertise to Porsche owners who want to realize the full potential of their vehicles. Hailed as the tuner of the fastest Porsches in the world, Gemballa has announced a new kit for the Porsche 911 Turbo called the Turbo GT 550. Designed for the new 997 models, it provides increased aerodynamics and a boost to 500 horsepower. The Turbo GT 550 requires less than 3.8 seconds to accelerate to 62 mph, or 3.6 seconds with over boost. 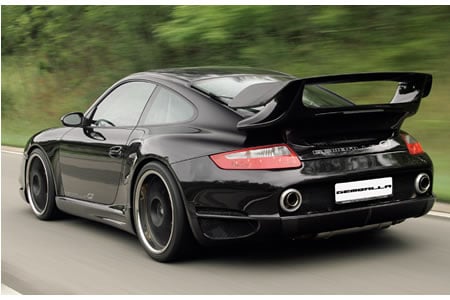 A front spoiler reduces lift on the front axle, while new side skirts maintain design consistency. Discreet air inlets help to cool the tires and brakes, and the rear wing has been significantly modified from the production version. It features openings at the bottom to supply the turbocharged engine with additional air, plus a large main spoiler to create downforce for the rear axle.