British yacht designer Alex McDiarmid has unveiled his new concept, an 85m yacht that boasts stunning and unique designs. The design is called the ‘Iwana.’ It is inspired by a species of lizards, Iguana – a Spanish form of the original Taino name for the species ‘Iwana,’ the indigenous Taino People of the Caribbean. The iguana characteristics were studied, such as stance and coloring. Some features include the stylish aft section of the hull, superstructure and ‘Day Light Opening’ / DLO window graphics, a full-length panoramic roof window running over the yacht iguana’s head shaped main superstructure and decks, and a communication tower inspired by their dorsal crests. Other features include two small balconies, two large bathing platforms, a helicopter, custom tenders, and water toys such as wave runners, sea scooters, windsurfers, kayaks, water skis, wakeboards, and a range of scuba and fishing gear.

It will be able to accommodate 16 guests and 20 crew members and will have a master suite, two VIP cabins, 3 double guest cabins and one twin guest cabin. 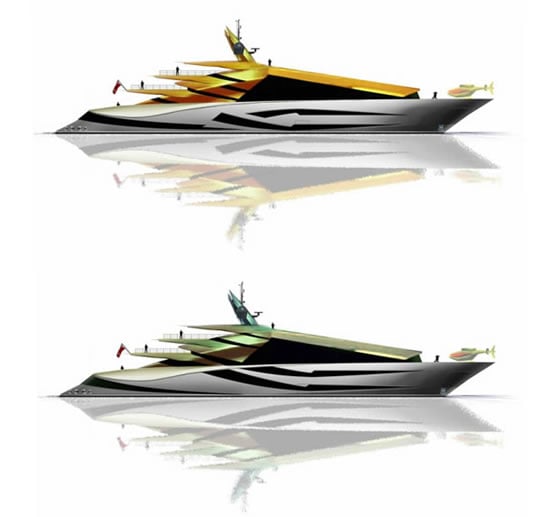