China is the new hot market for automakers. Almost every automaker wants to profit from this emerging market. So when it came to the Beijing Motor Show, Jaguar did not lose the opportunity to make its presence known in this market. At this show, the British Marque announced the Ultimate version of the XJ sedan. The car is one of two products launched in Beijing by the new Engineered To Order division of Jaguar Land Rover.

One luxurious offering, which a car aficionado in China will surely find hard to resist. The Jaguar Ultimate XJ boasts individually adjustable rear seats (separated by an illuminated and leather-trimmed center console), motorized fold-down tables, chilled champagne bucket and flutes, iPads with keyboards mounted to the backs of the front seats, and a 20-speaker Meridian sound system. Finishing touches are added by exclusive finishes like Herringbone veneer, machined aluminum, and LED lighting. 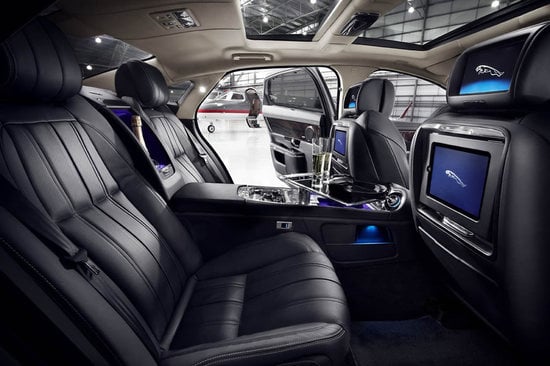 With a 510-horsepower supercharged V8, riding on an adjusted suspension and 20-inch wheels, this beauty will no doubt win more than a few hearts. However, the jaguar has decided not to limit this beauty to the Chinese market alone. We hear 30 examples (all in black) are all already slated to hit the United States market, with an asking price of $155,000.
[Autoblog]

Tags from the story
China, Jaguar