When a terrain vehicle comes together with a commercial spacecraft company, one usually expects a hovercraft in making. However, the partnership will see Land Rover vehicles become part of daily life for the Virgin Galactic team and for all ‘Future Astronauts’ the space experience will now begin with Land Rover as they arrive in New Mexico for training, and continue to the moment they drive from the space terminal building to the waiting spaceship.

Land Rover vehicles will be used by Virgin Galactic’s tourist astronauts at the company’s test centre in the Mojave Desert, California and at the actual base for space flights, Spaceport America in New Mexico. The cars will even be used to ferry passengers from the terminal to the spaceship itself. 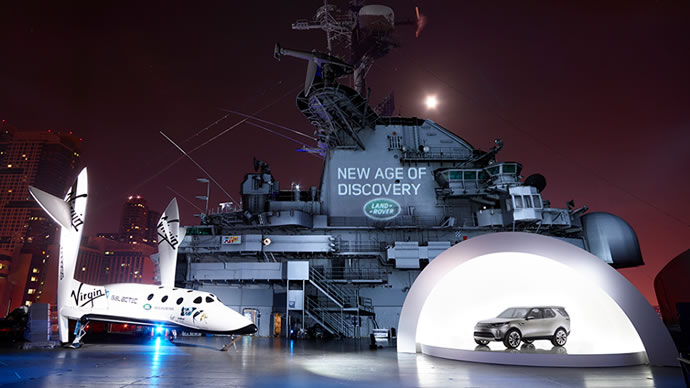 Like the Space Shuttle, SpaceShipTwo is the first of a revolutionary fleet of reusable human spacecraft that will allow an out-of-the-seat, zero gravity experience with astounding views of the planet from the black sky of space for tourist astronauts and a unique microgravity platform for researchers. To date, the company has accepted over $85 million in deposits from more than 700 individuals, which is approximately 20% more than the total number of people who have ever gone to space.

The Discovery Vision Concept will be on display at the New York Auto Show, which opens on Wednesday 16th April.

Tags from the story
Land-Rover, Virgin

A one-off Bugatti La Voiture Noire worth $18.5 million quietly shows up outside a hotel…

After Star Wars, Kross Studio has created a $80,000 lotus-inspired timepiece in collaboration with watch-designer…