With space tourism not being too new a concept, gear up to see more means of space transport in the coming years. Many of the rich tourists will be jetting into space within a few years in a craft that looks like a cross between a corporate jet and something out of science fiction. All set to compete with the Virgin Galactic spaceships, we have California aerospace company entering the space tourism industry with a two-seat rocket ship. Dubbed as the Lynx, it is the size of a mini private plane and is capable of suborbital flights to altitudes more than 37 miles above the Earth. Developed by Xcor Aerospace, it is scheduled to zoom into the cosmos by 2010. The Lynx is designed to take off from a runway like a normal plane, reach a top speed of Mach 2, and an altitude of 200,000 feet, then descend in a circling glide to a runway landing. Shaped something like a bulked-up version of the Rutan-designed Long-EZ homebuilt aircraft, its wings will be located toward the rear of the fuselage, with vertical winglets at the tips.

Powered by clean-burning, fully reuseable, liquid-fuel engines, the Lynx is expected to be capable of making several flights a day. Xcor’s Lynx also is intended to return as a glider but with the capability of restarting its engine if needed. 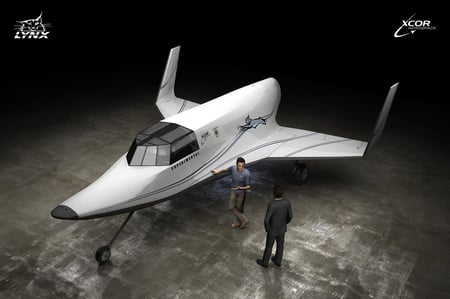