Last of the Maybach 62 luxury saloons rolled out of the assembly lines in December 2012 as Daimler announced the end of production due to poor sales, and it was believed that the brand name was not to be revived any time soon. A fresh round of rumors started at the end of 2013 suggesting that the new 2015 Mercedes S600, which was believed to be the top-of-the-line S-Class, was the replacement for the Maybach 62. In a surprise move, Mercedes Benz is all ready to bring back the Maybach name for the long-wheelbase version of S-Class.

Mercedes will be reviving the Maybach name for the top of the line, extra long-wheelbase version of S-Class which will be the third body type in the line-up and positioned above the S600 and the S65 AMG. Though there is no confirmation but the luxury limousine is expected to be almost a foot longer than the standard S-Class and feature an entirely reworked rear section with new rectangular rear doors and a new rear passenger compartment with first-class seating. As reported, it will arrive with an option of either a V8 or a V12 engine, including the twin-turbocharged V12 producing 523-hp and 612 lb-ft of torque found on the new S600. According to Mercedes Benz, the new Maybach limousine will be priced at $250,000-$300,000 for the unarmored version, and will go head-to-head with the likes of the Bentley Mulsanne, the long-wheelbase Rolls-Royce Ghost, the long-wheelbase Range Rover, and the rumored extra-long-wheelbase BMW 7-series. It is expected to arrive at the dealerships by the end of 2014. 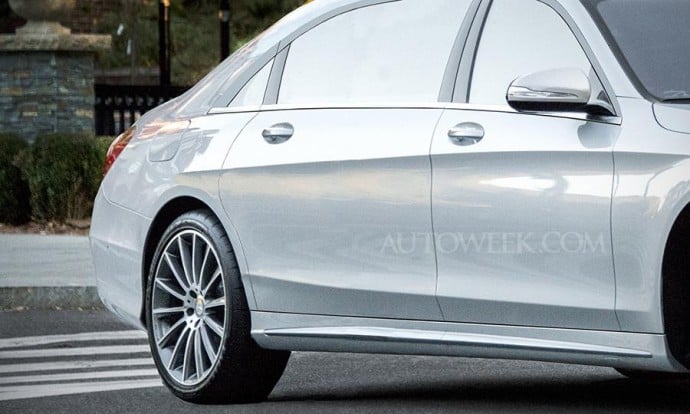