Having steadied well on the roads, Rolls Royce has entered fresh ‘waters’ with renowned shipbuilder Palmer Johnson to collaborate on the most ambitious projects known as the PJ World Yacht. Palmer Johnson’s acquisition of Flekkefjord & Slipp, a Norwegian builder of exploration vessel, paid generously for the 82-meter Ice Class mega yacht concept that features everything that ‘luxury on a cruise’ could comprise of, right from a helipad with elevator-equipped hangar, to a submarine garage and a six-floor interior designed by Italian naval architects Nuvolari-Lenard- including a three-deck master stateroom, a swimming pool, gym, and a spa home theatre.

READ:  Bentley has helped design the interiors of a sailing yacht to match a customer's Continental GT

The part where Rolls Royce’s expertise comes into picture is that of marine equipment. The yacht comes equipped with pirate defense features such as water canons and thermal imaging cameras as well as an environmentally-friendly diesel electric propulsion system. 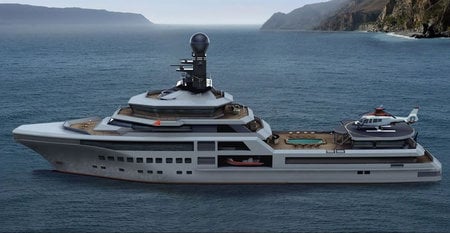