While other carmakers such as General Motors Corp. and PSA Peugeot seek state aid, Porsche, the German Carmaker, is about to unravel a $130 million museum in Stuttgart, near the company’s southern headquarters. It is, in point of fact, what the company’s CEO, Wendelin Wiedeking, calls the museum, “Our new visiting card” for the fact that the museum will welcome international customers who may not drive a Porsche but are fascinated by the sports car. The all-white museum is the most spectacular building in the company’s 78-year history. The museum consists of 21,000 cubic meters of concrete, 6000 tons of steel, materials never before used in modern construction, and the collection of the best Porsches’. The futuristic structure is designed by Vienna architects Delugan Meissl, and the building has 5,600 square meters for 80 vehicles, such as the 356 Spyder, the car that the actor James Dean was driving when he died in a 1955 crash and also the latest generation of the 911 Carrera Sports car.

READ:  Check out the one off Porsche 911 R Steve McQueen special

The decision to build the museum was conceived in 2004, the complexity of the task eventually caused costs to double and delayed the completion of the museum by more than an year. The Porsche Museum opens from Tuesday to Sunday, from 9AM to 6PM. Admission for adults costs 8 Euros (US $10) and admission for children below 14 years of age is free if accompanied by an adult. 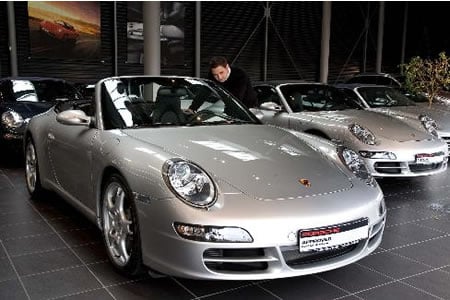 READ:  Porsche has announced a unique personalization option that will put your fingerprint on a 911 for $8100