Mover Q your amphibious car designs are redundant, maybe they were good enough for the previous spies but the next-gen demands a more synced-up version. In case you need to take pointers, make sure you are there at the Geneva Motor Show (March 6th thru 16th, 2008), where Swiss design company Rinspeed will showcase their sQuba Concept Car. The makers claim that it is the world’s first real diving car. And if its aquatic feats were not enough, the car can (at the push of a button) drive autonomously. It can dive to the depth of up to 10 meters (33 feet). The “sQuba” fulfills Rinspeed’s boss Frank M. Rinderknecht’s long-cherished dream of creating something that marries fictitious movie concepts to reality. Thus taking inspiration from “The spy who loved me”, sQuba features an electric motor with powerful torque that drives the rear wheels. The thrust on the water is ensured by two propellers in the stern and two powerful jet drives in the bow propel the vehicle underwater while diving. The car promises zero-emissions thus zero pollution to the water. The lightweight body with components made of futuristic Carbon Nano Tubes encloses in a streamlined manner the driver and passenger who are supplied with fresh breathing air by the self-contained on-board system.

Rinspeed sQuba Concept Car is a one-off car. No commercial production is planned. 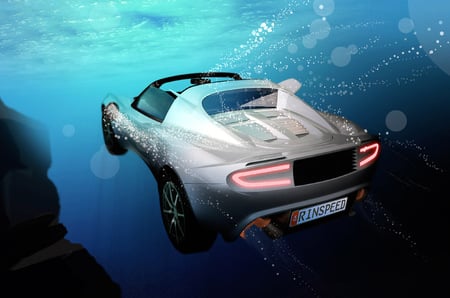