Inspired by ‘The Spy Who Loved Me’(1977), Rinspeed chief Frank M. Rinderknecht has finally managed to realize his dream. He has announced his newest project – a real underwater car! Christened as “sQuba,” the car can both drive on roads, and then at the push of a button dive up to 10 meters (33 feet) under the sea. Precisely after three decades, the sQuba concept symbolizes the realization of this fantasy that once sparked his imagination. All set to be unveiled at the Geneva Motor Show 2008, sQuba is the world’s first real car that is amphibian by nature, thanks to some cutting-edge technology. Powering the concept is an electric motor mated to the rear wheels. The propulsion on the water is ensured by two propellers in the stern and two powerful jet drives in the bow to propel the vehicle underwater. The body is constructed from lightweight components made of Carbon Nano Tubes and contains an on-board air-filling system. 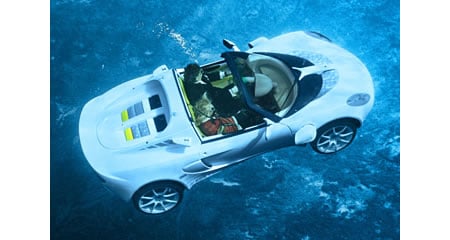 When under water, the occupants can get oxygen from an integrated tank of compressed air that divers know from scuba diving. The interiors are also luxe as the innovative salt-water resistant interior from Strähle + Hess features genuine mother-of-pearl trim and diamond-plated non-slip inlays from KGS Diamond. The high-tech VDO instrument cluster and controls create a futuristic ambiance and allow controlling all vehicle functions even while submerged. But its not believed to hit the production level in the near future. So if you were planning to check your bank balance to book this bay-watch beauty then you will need to wait a bit longer.