The single-seater British fighter plane Supermarine Spitfire that took on the German forces in World War II is considered to be one of the most legendary names in the aviation history and is still lover by enthusiasts for its killer good-looks and deafening engine noise created by the 27-litre Rolls-Royce Merlin V12 engine. Though it’ not uncommon to come across boats inspired by cars, but finding luxury watercrafts inspired by aviation legends is rare. But this stunner created by yacht design studio Claydon Reeves is a high-performance boat with modern design but powered by one of the most legendary powerplants in aviation history.

Set to be unveiled at the Salute to Style in London on July 16, the Aeroboat is inspired by the Supermarine Spitfire fighter and has the same 27-liter Rolls Royce Merlin V12 engine. Only 10 of these Aeroboat superyachts will be built and will be priced at £3 million ($5 million). The whole boat is sculpted out of carbon fiber, Kevlar and lightweight wood veneer to keep the weight down and ensure it rides the waves with ease. Each Aeroboat will be powered by a re-conditioned fuel-injected Rolls-Royce Merlin V12 with “documented provenance”, detuned to around 1,100bhp and allowing for a potential speed of between 75 and 95 knots. “The Aeroboat is one of the fastest and most elegant small yachts ever produced. It is perfect for anyone wanting to breakfast in St. Tropez, lunch in Antibes and dine at night in Monaco,” said the spokesperson for Claydon Reeves. The Aeroboat will also feature aircraft-inspired switchgear and shock-mounted seats into a long, sleek form. 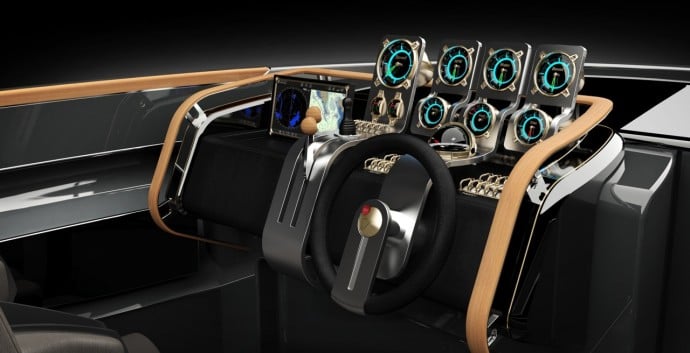 Tags from the story
Speedboat