Collaboration between Caterham Cars and Sunseeker International of luxury yachts fame is big even if it is said to last for a week! Well, the union is not so huge anyway to last forever. The Sunseeker’s are out with a special edition of the Predator 108 S, which will loan out its garage area to the sparkling Caterham sports cars, Seven, not only to store them during your high-seas ride but also launch yourself with ease on the exotic shores like those in Monaco, Cannes, and Cape Town without even stepping out of the yacht!

The luxury yacht Predator is capable of hitting up to 34 knots speed and can accommodation up to eight guests. The super yacht will be showcased at the 2010 London International Boat Show 2010. The yacht will be available at $11.3 million and if you insist for the Caterham Seven, then dig out another $20,700. 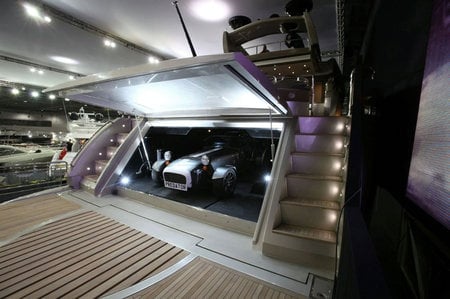