When we think of luxurious yachts like the Oculus, we think of grand interiors, exquisite rooms, and ultimate comforts. But here is a luxurious yacht with a difference. Known as the SY Thalia, this yacht is a 59-foot ketch, fitted out with an award-winning array of the latest and greatest AV gear reserved for luxury homes. An electronic haven, it boasts of 12 entertainment, video, and navigation zones, including five video screens, one of which is a home theater! Liquid Automation was given the task of installing this entire entertainment system, which has cost more than $300K! A few installations include an NEC 40” LCD TV, a Marantz DVD player, SpeakerCraft surround sound speakers, and a computer with a wireless keyboard in the owner’s cabin. The saloon has a Marantz AV receiver and DVD player, big screen TV, wireless remote, wall-mounted touch panel control, surround sound, 2 x subwoofers, and a gateway to wireless receive AV signals from the media server.

The gym, bar, study, aft cockpit, theater, and the three guests’ cabins too have been equipped with the best of entertainment gizmos. The captain’s cabin has a DVD player, Crestron keypad, wireless computing, audio switching capabilities, and Samsung 19” LCD TV.
Most of the gear is housed in the central rack and distributed via Crestron and Sonos infrastructure. The rack holds a Kaleidescape media server and players, Crestron distribution equipment and tuner, a 1TB HDD from Netgear for AV storage, and a patch-panel for changing set-ups in the cabins. The pilothouse and the helm are connected via Cat 5 cable and have LCD touchscreens and audio. The hi-tech security includes cameras at all external parts of the yacht (including thermal imaging), which are linked back to a central point and rack temperature and humidity monitoring with email alerts, ‘anchor watch’ for the crew, and emergency deck mute. After installing the entire system, key crew members were trained on how to operate all the AV gear.
Liquid Automation attributes the system’s success to locating a large amount of the equipment in three centralized areas. The team at Liquid Automation overcame all major challenges of integrating the AV into the existing systems. Their efforts won them the recent CEDIA Asia Pacific award for best marine installation. What is more, this yacht even competed in the Millenium Cup off New Zealand in February this year. 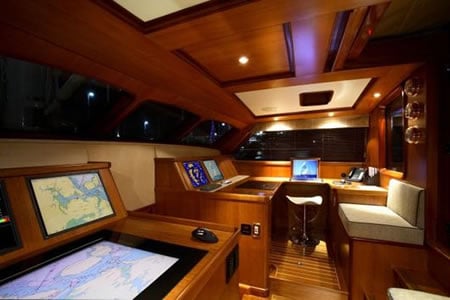 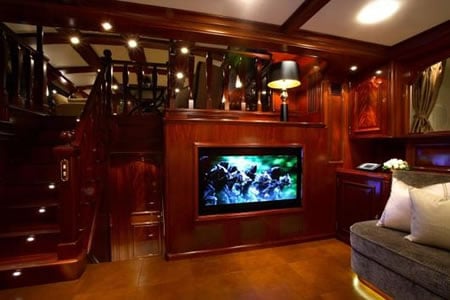 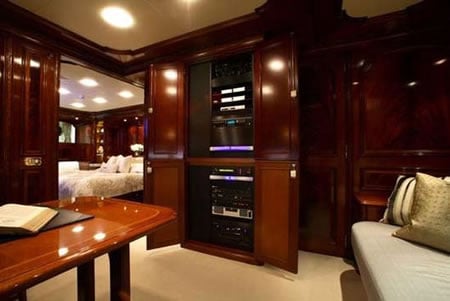