Switzerland-based luxury watch and jewelry brand Bucherer has partnered with fellow Swiss custom motorcycle maker Bündnerbike to create one-of-a-kind chopper, which the company claims to be the world’s most expensive motorcycle. Valued at 1.8 million Swiss Francs or approximately $1.79 million USD, the one-off bike is based on a Harley-Davidson Softail Slim S; however, Bündnerbike has completely transformed the motorcycle into a hardtail chopper with a springer front end. The motorcycle wears an extremely eye-catching iridescent blue custom paintjob, for which a specific technique had to be employed, as it was first silver-plated, before six color coatings were then applied using a secret coating method. 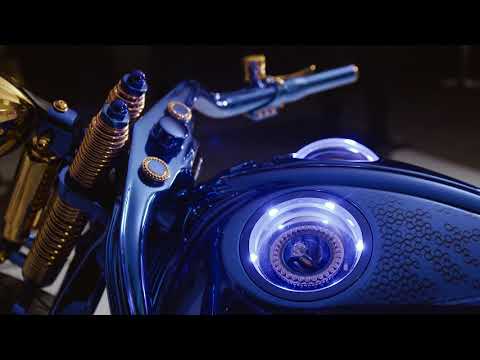 The custom motorcycle is embellished with 360 diamonds, along with gold-plated screws integrated into the tank, which contains a one-of-a-kind Bucherer timepiece that features elements of a motorcycle engine on its dial. The tank also houses a large Dizzler diamond ring from the Bucherer Fine Jewelry collection along with a six-prong Heaven solitaire ring with a 5.40-carat diamond. Bündnerbike took a year to design and create this special Harley-Davidson Blue Edition. A team of eight employees from both the brands put in more than 2,500 working hours collectively to complete the project.