A mention of three-wheeled automobiles might remind you of the horrifying stability (or rather instability) of Asian Tuk-Tuks and the funny looking Reliant Robin, but we have seen that pushing the single wheel back in the construction can make the trikes a lot of fun. Both Morgan 3 Wheeler and Campagna T-Rex are bonkers when pushed hard. Now there is another three-wheeled roadster which looks quite like the KTM X-Bow but only with a single wheel on the rear blending the best elements of a motorbike and a sports car. And this one’s from the United State. Polaris has finally unveiled the three-wheeled Slingshot, and much to our liking the design looks futuristic with sharp edges and bold lines. The angular body sits on top of a steel spaceframe that supports the dual-wishbone front suspension. There is an aluminum swingarm and a carbon fiber reinforced belt drive in the back. 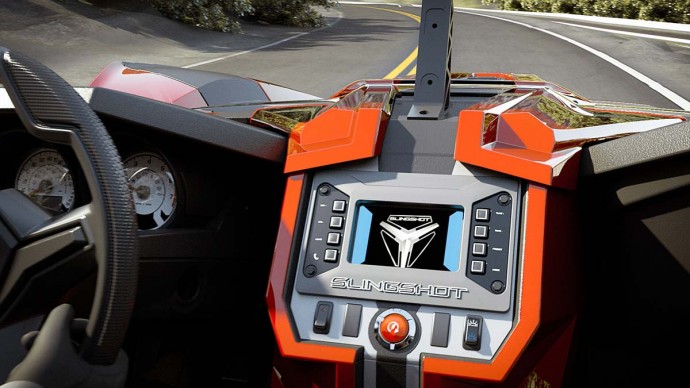 Power comes from a 2.4-liter, four-cylinder GM Ecotec engine delivering 173 hp 166 pound-feet of torque through a five-speed manual transmission to the rear wheel, and considering that the whole package only weighs less than 1,750 pounds all we know is that the Slingshot is going to be absolute bonkers. The base model has 205-series front tires, while the SL will come with 225 rubber up front. Out back, the base model sports a 265-series tires while the SL drops to a 255 unit that is a lower profile on a larger wheel. But unlike the steep pricing we have seen on other track-focused cars, Pricing on the base model of Polaris Slingshot starts at just $19,999 and the SL jumps to $23,999 making it a mouthwatering buy.