This is not the official countdown, but we were tickled to know that there is an entire faculty out there trying to woo the Geek Travelers with their hospitality. Offering more than the WiFi, theses hotels pamper the guests with high-end gadgetry, geek services, AI, etc. HotelChatter has done their bit, but we would like to highlight their efforts.
6. WYNN LAS VEGAS
The fake mountain in the backyard, gigantic floor lamps lighting the hotel’s entryway, and Herb Kohler at the craps table may deceive you to pass it off as just another flashy hotel, but the Wynn, Las Vegas offers a lot of goodies for the geek. There is a high-definition TV in every room (plus in poolside cabanas) with On-Demand HD movies (including HD porn selections). Every room has motorized drapes and lighting that you control with your own remote. The entire hotel’s phone system operates off VOIP from Avaya and your name and room number appear into other hotel phone’s caller ID (and vice versa). The hotel’s Red Card serves as your all-access pass to the resort. It’s your key card, your player’s club card, your reservations card, and your shopping cart. However, this Red Card’s RFID does store all your personal data.

5 SIDI DRISS, TUNISIA
Those who have not yet recovered from the Star Wars hangover need to trek Tunisia just to spend the night in the real Tatooine. Sidi Driss is essentially a five-pit dwelling of “underground labyrinths and vaulted rooms.” Parts of the Star Wars set still exist in the hotel. The giant Berber cave looks so much like the hundreds around town – half-sunken into the desert. Uncle Owen and Aunt Beru’s on-screen home has been left virtually untouched since 1977. What most geeks will appreciate is that it costs only
4 FAENA HOTEL + UNIVERSE, BUENOS AIRES
Faena Hotel + Universe, takes pride in being Buenos Aires’ most chic and trendily designed hotel. Each room has a strategically placed flat-screen TV that avoids the glare and the entire property comes complete with a strong internet connection, 802.11 is present throughout. The connection can easily be used for VOIP sessions while relaxing by the poolside. The kind of staff also offers you charging coils for your devices as you lounge around. Worth mentioning is the pool that creates the perfect optical illusion that things on the other side of the pool are floating. 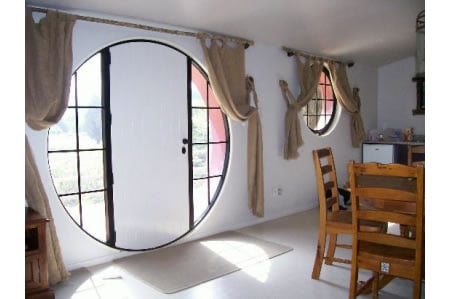 3. WOODLYN PARK, NEW ZEALAND
If you got hooked to Lord of the Rings, then this is your place mate. Woodlyn Park Hotel features two units burrow underground and have round windows straight out of the film. The furniture is a little modern for Middle Earth, but it blends perfectly. The classily furnished rooms with big beds make you feel like a small hobbit in them. There’s one double bed in the main lounge/dining/kitchen area and two bunks in a separate bedroom. The Waitomo Caves are five minutes away, where you can go backwater rafting in the glow worm caves. Matamata is the closest LOTR site, home to Hobbiton.
2 The Hotel @ MIT, BOSTON
It can’t get geeky than this; here is what the hotel brochure had to say:
“With historically significant robots from the MIT Artificial Intelligence Lab displayed in our lobby, to high-tech detailed décor, to complimentary wireless and high-speed Internet access in each of our Guest Rooms and public areas – be assured your visit will be comfortable and productive.”
Need we say more? Each room is equipped with a digital safe big enough for your “top-secret-info-carrying laptop”, and all 210 rooms also have access to a networked laser printer. Obviously, free WiFi is offered, but the in-room super fast, a T1 line is where the hardcore geeks hang out. The décor is in tune with the technologies offered. Vintage photos from “Intro to Mechanical Engineering Classes”, equations on the blankets, chemistry cartoons in the bathrooms, patents behind the concierge desk, the list is endless. Totally Geeked-Out Place! 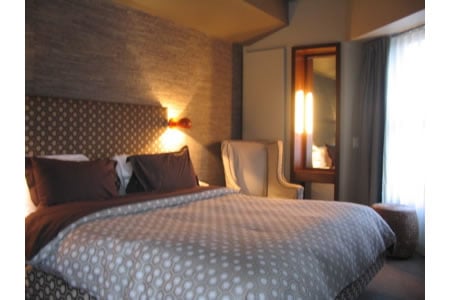 1 THE TRIBECA GRAND, NEW YORK
Equipped with the istudio, the Tribeca Grand boasts of its geeky side. Apple gizmos and gadgets adorn every room. Stuff like the photo, video, and sound editing software, cameras, and wireless peripherals. A Bose SoundDock is there for your iPod. In case you forgot yours; the hotel has an iPod ready for you with preloaded tracks from Ratatat to Cat Power. You can set up your own playlist too! It is recommended that you ask for rooms ending in 06 or 16. The hotel will set up other rooms with older computers, but the G5’s reside in the 06 and 16 rooms. And should you run into any tech probs (highly unlikely), the front desk manager Rob Stone is the resident Mac guru. You could ping him at Tribeca Concierge on AIM!
Those Who Missed The Bus….
1. The Hotel Royal in Munich who would be on the list if they were still had Xboxes running on Linux as set-top boxes.
2. The Gansevoort Hotel in New York has an awesome Wii setup.
3. The Hotel Commonwealth in Boston which has VOIP telecommunications that provides sort of a virtual private concierge service, updates you on the latest news including the latest stock prices. Their cordless phone works anywhere on the property.
4. The Rome Cavalieri Hilton in Italy offers personal MP3 tour guides in your own language at the concierge desk. The MP3 also serves as a digital camera and when you return back to the hotel after a day of sightseeing, the concierge will burn your pictures onto a CD.
Source