The world of superyachts seems to be on a wide expansion spree, and there’s no stopping it. The latest news we hear is about Eclipse, the world’s largest superyacht launched in Hamburg by Blohm and Voss shipyard for Russian billionaire Abramovich. Designed by Terence Disdale, the luxury yacht has a gross weight of 13,000 and measures 170 meters, making it the largest yacht in the world. It can accommodate about 24 guests with a 70-member crew and achieve a top speed of 33 knots and a cruising speed of 22 knots. The superyacht has superseded Dubai ruler Sheikh Mohammed Bin Rashid’s 530-ft Dubai, ranked as the world’s biggest yacht formerly. The yacht will be ready for delivery by 2010 and used by Roman and his girlfriend Daria Schukova for the 2010 World Cup in South Africa.

READ:  The world’s largest aircraft takes a step closer towards its first flight

If you’ve assumed that its rank is its only winning accolade, then we need to enlighten you about the yacht’s antiballistic missile system being installed by ATS, provision for armor plating surrounding the bridge & Ambrovich’s master suite, bullet proof windows, underwater submarine launcher that could be pitched to a depth of 160-ft (also doubles as an escape pod), as well as two helicopter pads. Recession? Ambrovich has probably never heard that word! 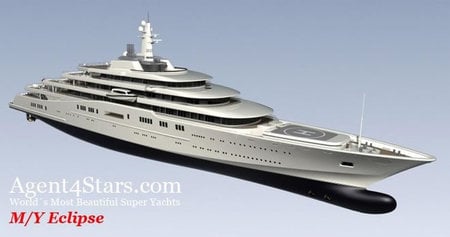