At a media event in Germany one of the worlds largest cruise ship operators Royal Carribean announced the technology advances coming to its newest cruise vessel, Quantum of the Seas. Definitely not your average cruise ship, the Quantum of seas will feature robot bartenders, electronic wristbands that serve as room key, a 300ft-high viewing capsule and virtual balconies, the high-tech vessel is the world’s most futuristic cruise ship. The massive vessel weighs 167,800 registered tons and has 18 decks, carrying 4,180 guests at double occupancy and features 2,090 staterooms. It is the third largest cruise ship in the world behind two other Royal Caribbean liners – the Allure of the Seas and Oasis of the Seas. 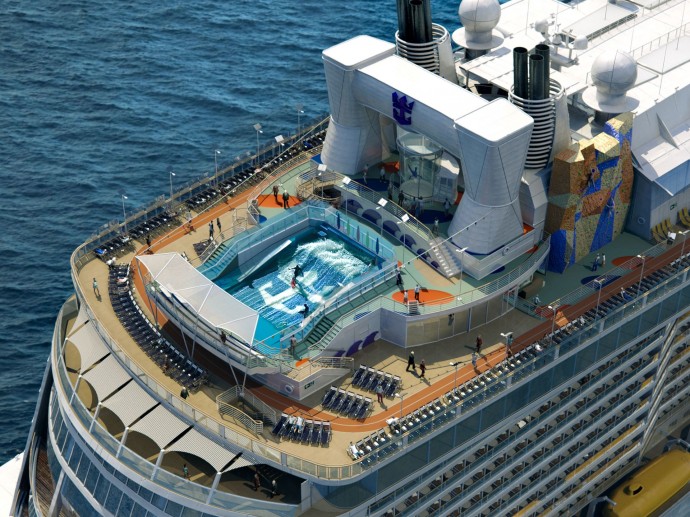 Royal Caribbean was the first to offer miniature golf courses and rock climbing walls on ships, now found on many vessels, and in recent years has unveiled the first ice skating rinks, surfing pools and zip lines at sea. Here are 5 ways sailing on Royal Caribbean’s newest cruise ship will blow your mind: 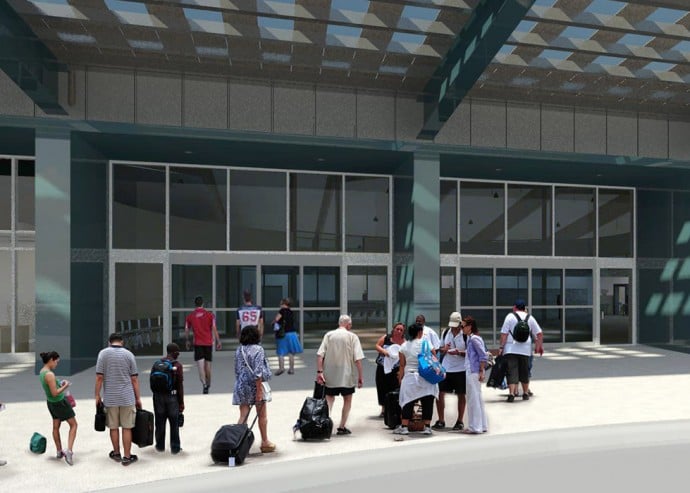 5. Concierge
After stepping foot on the ship, passengers will receive wristbands embedded with radio-frequency identification technology (RFID) that serves as a room key while allowing them to navigate the ship, make onboard purchases with a simple tap.

The apps – Cruise Planner and Royal iQ – enable guests to make their cruise choices, allowing them to research and book restaurant reservations, shore excursions and spa appointments on their own while organizing their calendar and keeping in touch with other passengers and loved ones at home. 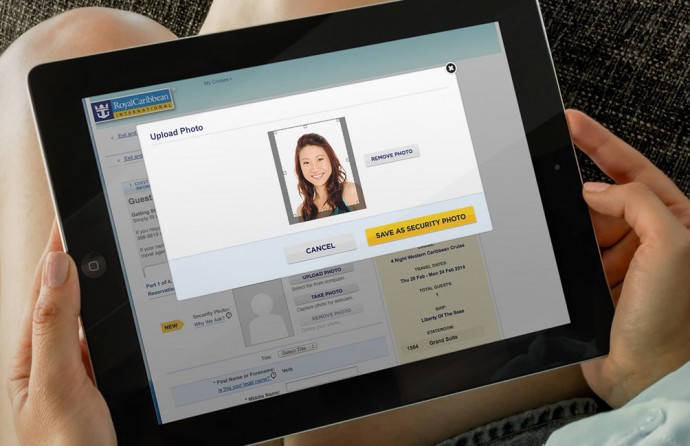 4. Smart Check-In
Not only can guests generate boarding documents online but can go from “sidewalk to ship” in 10 minutes with no check-in counter, no forms to fill out and no lines to stand in. Guests will be able to track luggage in real time on their smartphones. Luggage will be tagged curbside with RFID technology at drop-off, and guests can monitor their bags’ progress through key points en route to the stateroom. On departure, the process is reversed. 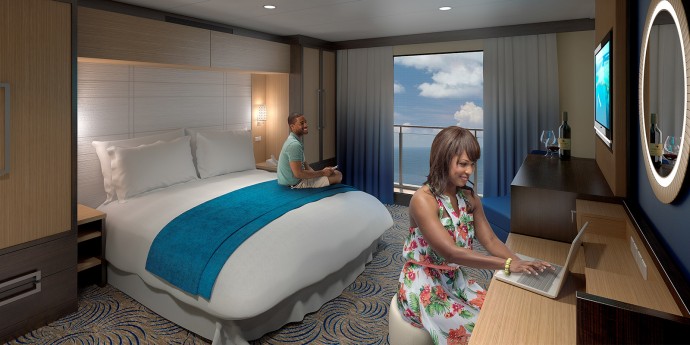 3. Connectivity
With speeds that match fast broadband connections onshore, guests can be online 24/7, no matter what personal device they bring onboard. Guests can watch streaming video, check email, share images on social media and enjoy face-to-face video conversations – even in the middle of the ocean.

The technology benefits extend to the ship’s crew. Custom apps will allow crew members to keep better track of guests’ tastes and preferences, allowing staff to tailor their already remarkably personalized service to an even higher degree. Whether a guest prefers gluten-free dining, early show seating, or shiatsu massage, the features of the smart ship allow crew members to anticipate every need. 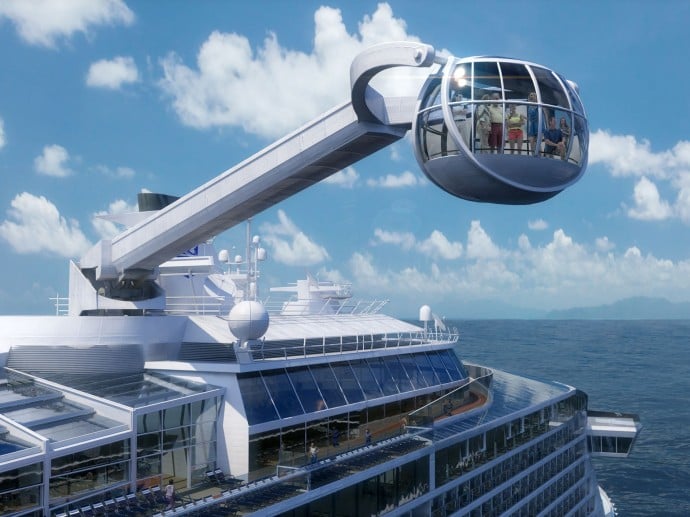 2. ‘First at sea’ experiences
Quantum of the Seas introduces an all-new set of groundbreaking firsts never before seen at sea. One of the most anticipated features, the exclusive North Star will elevate you to reveal 360-degree views of a world you’ve truly never seen before. The jewel shaped capsule ascends over 300 feet above sea level, where you can take in breathtaking views of the ocean, the ship, and the destinations. 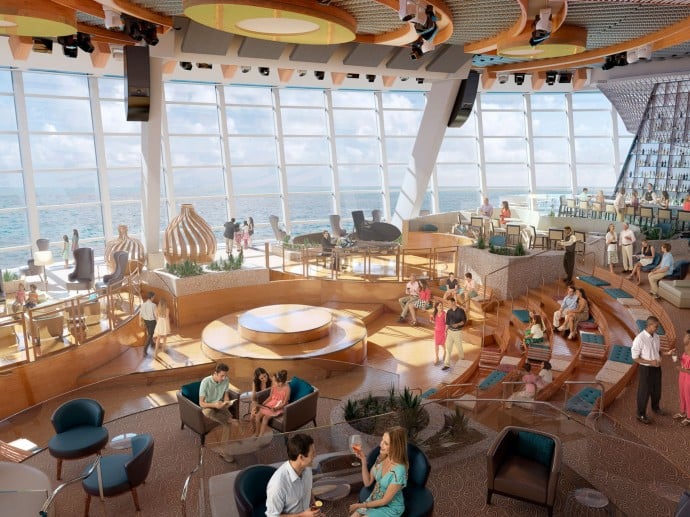 Two70 is home to a playful and agile troupe of six Roboscreens that stage surprise performances during every cruise, creating scenes while soaring and twisting solo, or uniting as one. 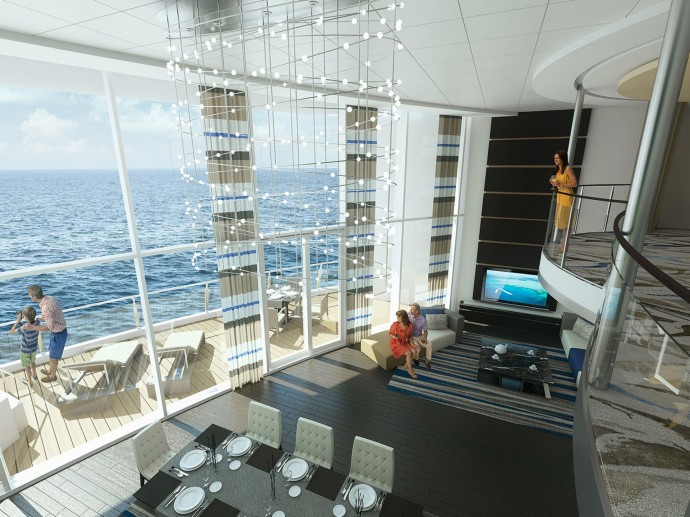 Guests will also experience Vistarama, floor-to-ceiling glass walls that transform into an expansive ambient surface that projects any scene, real or imagined, including the multidimensional performance spectacle, Starwater.

Interior accommodations are outfitted with Virtual Balconies that display real-time sights and sounds of the sea through 80-inch LED screens, ensuring every stateroom has a view.

Guests can also experience the thrill of skydiving in the middle of the ocean with the first skydiving simulator at sea. 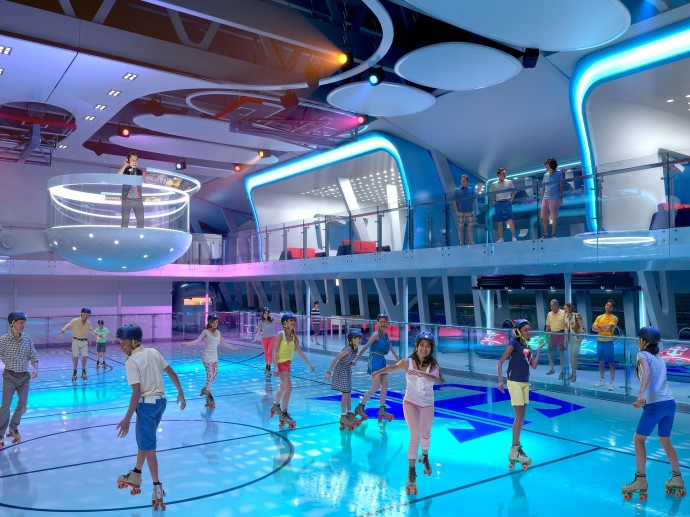 Quantum of the Seas will be the first cruise ship to offer a rolling skating surface. 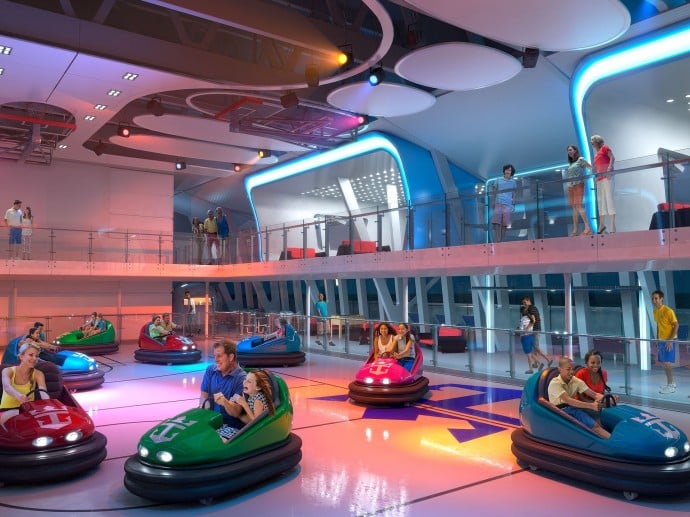 The largest indoor active space at sea, SeaPlex on Royal Caribbean’s Quantum of the Seas will feature first-ever at sea experiences such as bumper cars a circus school with trapeze. 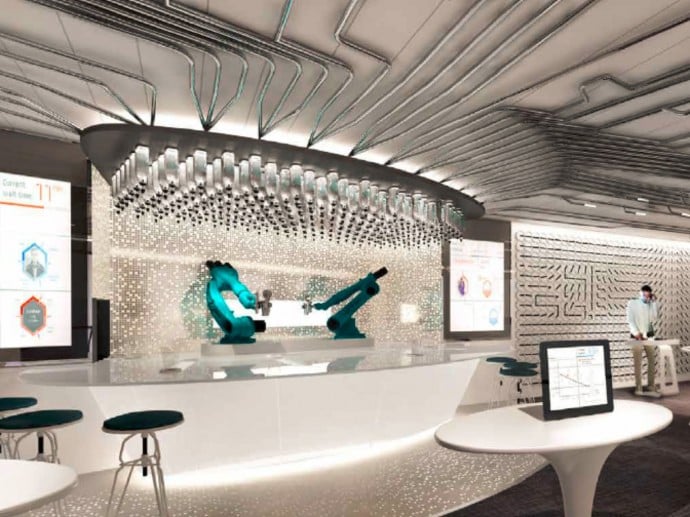 Quantum of the Seas will sail out of Southampton to a port near New York on 2 November. From there, it will sail to destinations in the Caribbean, including the Bahamas and Bermuda, before departing to her new homeport of Shanghai (Baoshan), China.