The mere thought of diving off a 17- meter height can send jitters down one’ spine. Now imagine performing this stunt off a scarily high platform on a moving cruise ship? While this may have got you petrified already, it happened to be quite a seamless task for athlete– Cesilie Carlton. A footage of celebrated gymnast limbering atop a 55 ft high platform on the Harmony of the Seas cruise ship, (before taking a plunge into the pool underneath) has recently gone viral on social media – making her a well-deserved star in her own right.


The impressive and clearly frightening footage, shot by Carlton’s fellow diver- Sydney Brown features her diving headfirst into the pool while performing a series of somersaults into the air. The fearless acrobat who also happens to be a Red Bull cliff diver has successfully garnered more than 250,000 views on Instagram since the footage was posted by her on the forum last week. Opining on the exhilarating dive, fellow cast member Sydney also revealed – “We have the deepest pool at sea, and if the ship is moving from side to side, the water in the pool can spill out”. He further stated – “We always begin with rehearsals at our entertainment facility in South Florida and then have about two weeks to bring the show to life onboard”. 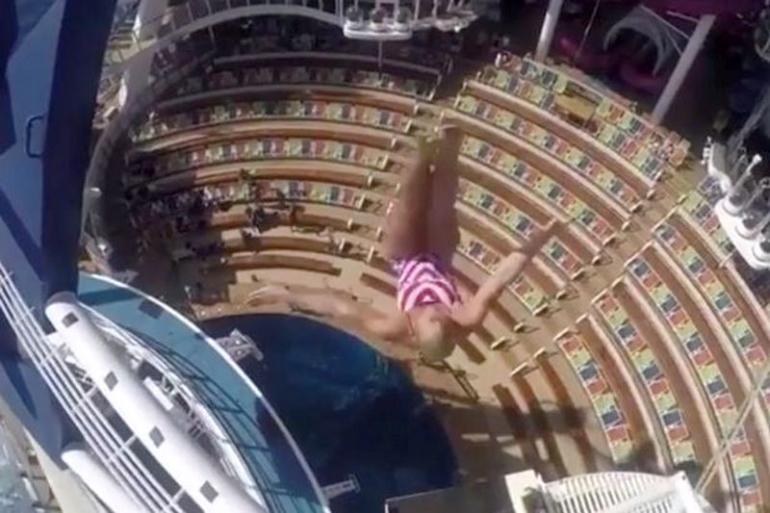 The harmony cruise ship, where the exciting dive took place, happens to be the largest passenger liner in the world boasting of a capacity for 5,479 guests and a 2100- member crew, out of which 20 are performers (like Carlton) at the AquaTheater seen in the video. Carlton who regularly performs such feats is also a winner of the gold medal at the 2013 World Aquatics Championships. Well, that helps in explaining her brave (and highly commendable) water stint!