Saint-Tropez is a coastal town on the French Riviera made famous when 50s-60s French screen sensation Brigitte Bardot stepped foot on this historical town many sleeps ago.

The village got its name from Saint Tropez who was born in Pisa, Tuscany of patrician lineage. A brilliant officer, he was chosen by the emperor, to hold the charge of steward of his palace. He was converted by Saint-Paul while he was his custodian. Torpetius solemnly professed his faith during a feast organised by the Emperor, who condemned him to death. Torpetius’ head is still kept in a chapel dedicated to his name, in Pisa. His body was laid in a boat with cockerel and a dog (symbols of malevolence in the Roman bestiary), at the mouth of the River Arno. Borne along by the Liguria current, the boat with its precious load miraculously unharmed, ran on to the shores which were later to be named Saint Tropez, on May 17, 68 A.D.

Luxurylaunches.com in coordination with the concierge of the Hotel Byblos Saint Tropez brings to you an account of Saint-Tropez, from a Tropezian’s point of view. ‘A reminiscent of a Provencal seaside village’, Hotel Byblos Saint Tropez is a destination all too familiar amidst the high-heeled as well as ‘jet-setters, celebrities and artists’. Most renowned for being the choice of proclaiming love to a partner, where Mick Jagger proposed to his first wife, the resort is a Mediterranean paradise. 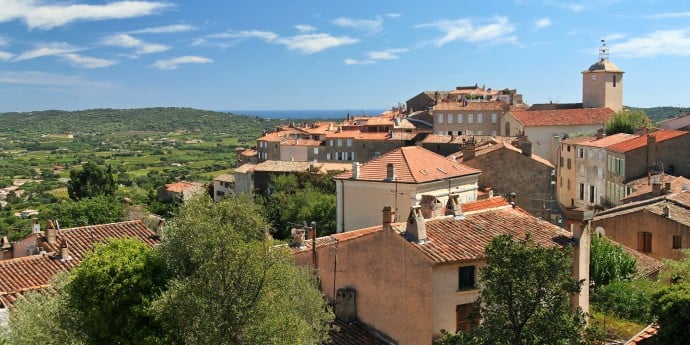 Ramatuelle
Ramatuelle is a charming and peaceful village of 2,500 inhabitants nestled up the hill near Saint-Tropez. It was built on a hill to defend itself against enemies and it dominates the Bay of Pampelonne and the agricultural plain, at an altitude of about 130 metres. 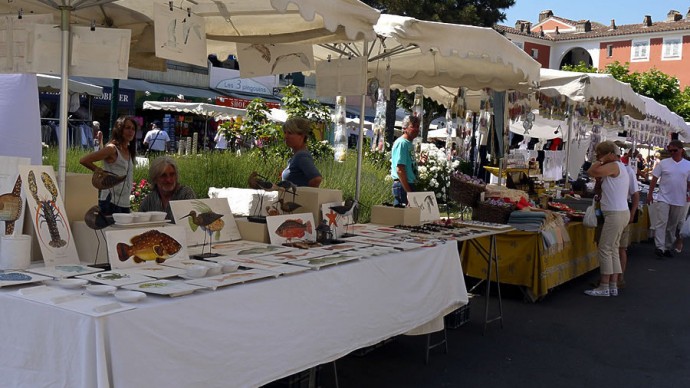 As typical of Mediterranean villages, the core architecture of Ramatuelle reveals porches, stairs, passages, squares, narrow streets paved with flowers, church and its bell tower. Ocher facades and pastel shutters are decorated with jasmine, honeysuckle and bougainvillea – a feast for your senses. 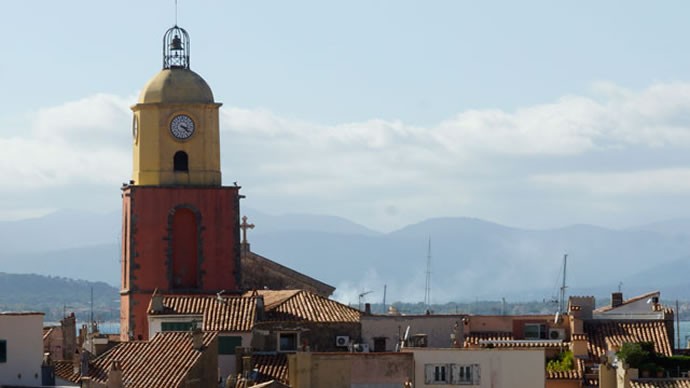 While in Ramatuelle, you must not miss the market on the central place de l’Ormeau, the narrow streets cramped between the ancient ramparts, the Porte Sarrasine, the church, the vineyards and Paillas windmills. 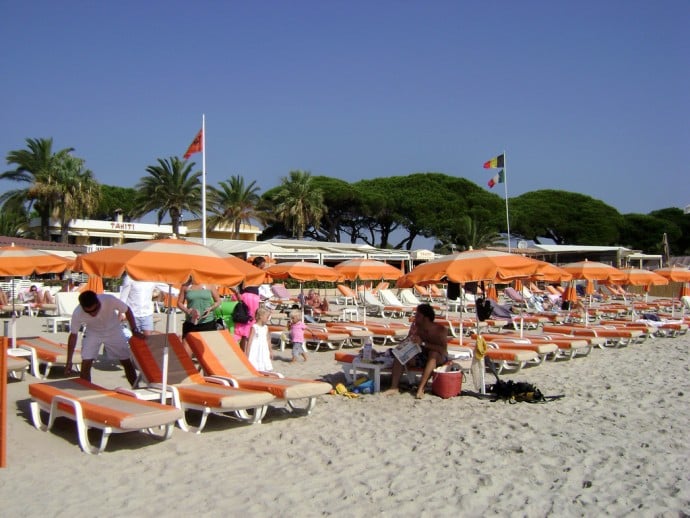 Located in Ramatuelle, the bay of Pampelonne of 27 hectares is believed to be the origin of Saint Tropez. Frequented by the jet set, the bay is one of the most famous beaches in the world. Two institutions are at the origin of this myth: “Tahiti Beach” installed in 1946, using the bamboo décor abandoned by the Victorine studios in 1935 during the filming of the movie “Song of the Islands” by Georges Manae, and “Club 55” (created in 1955), that was a canteen for the team shooting “And God Created Woman” featuring Brigitte Bardot and which became a popular restaurant. 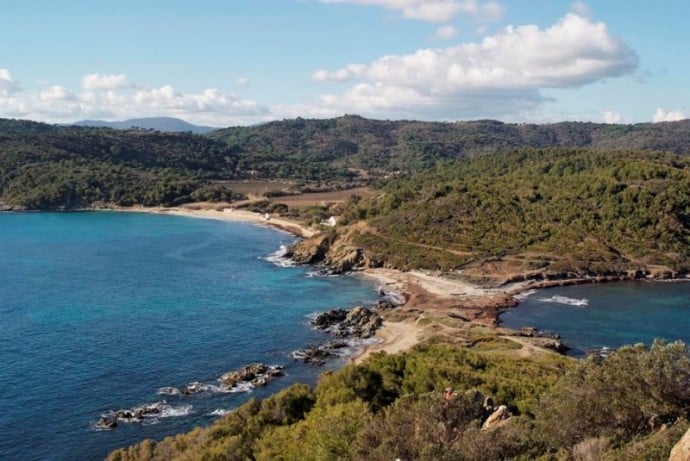 Escalet Beach
In between the Cape taillat and the Cape camarat, this beach, spread out on about 350 meters, is ideal for a family outing. Several sport and water activities are available including snorkel indispensable for exploring the seabed… unless you prefer to rent a kayak!

Tarte Tropezienne: local dessert
Having fallen in love with picturesque Saint-Tropez, a small Provençal village with its clock tower, its lovely little harbour and its chirping cicadas, Alexandre Micka opened a pastry shop in 1955 on the square near the village hall. Amongst other things, here he sold a brioche with a cream filling inspired by a recipe of his grandmother’s.

Not far from Alexandre Micka’s pastry shop the legendary film “And God Created Woman” was being shot. During filming, the crew came to the shop often and developed a taste for the brioche with its cream filling. This is how the gorgeous Brigitte Bardot herself came to swear by the merits of only one cream brioche: that of Alexandre Micka.

The story says that Brigitte encouraged Alexandre to give his cream brioche a proper name. And thus was born “La Tarte Tropézienne”! This is how the legend began, intricately linked with the career of Brigitte Bardot, and what has driven international stars and artists who visited Saint-Tropez to enjoy the unpretentious, cheerful atmosphere. 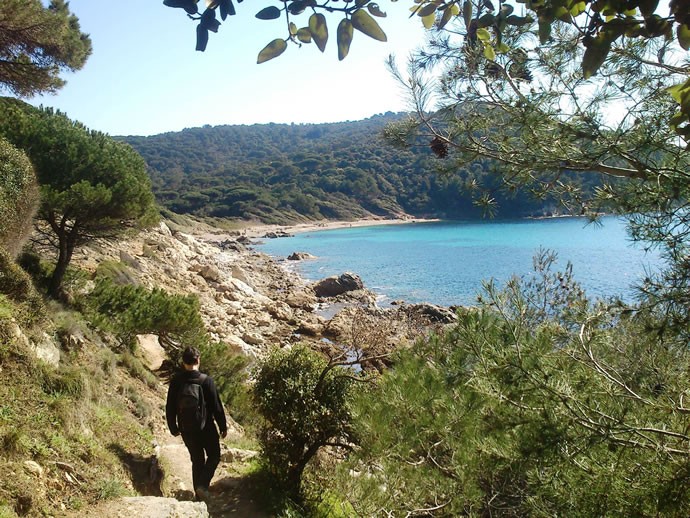 Coastal path from Saint-Tropez to Gigaro/La Croix Valmer
The Sentier du Littoral (“Coastal Path”) is a hiking trail that starts/ends in St Tropez and runs for at least 25 miles to Gigaro and Cavalaire, around the perimeter of the St. Tropez peninsula. The St Tropez trailhead is next to the ramparts at the far end of the port, past all the restaurants lining the street. The pathway follows the waterline and is well-defined for the most part so it is easy to keep from getting lost.

A nice 9-mile loop hike can be made, starting from St Tropez, following le Sentier du Littoral 7 miles along the coast to Tahiti Beach, have lunch at Tahiti and then take the Rue de Tahiti 2 miles back to St Tropez village. 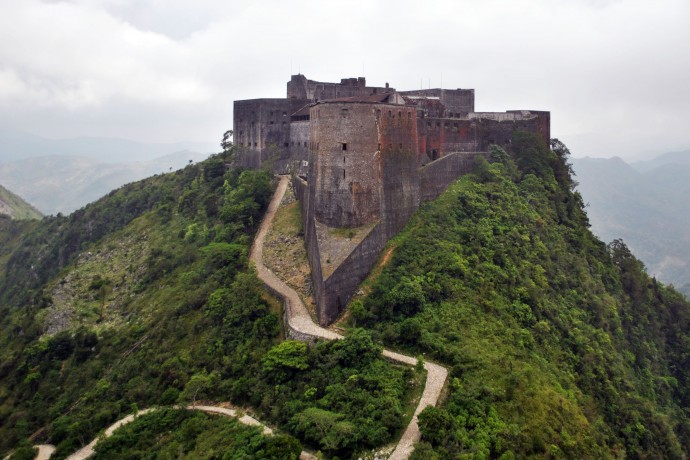 Best View: From la Citadelle, two steps from the Byblos
As from the 17th century, bought by the town in 1993, this listed building is one of the most visited historical and cultural sites.

Composed by bastions and a hexagonal keep built between 1602 and 1608 on the drawings of engineer Raymond de Bonnefons, it is the most significant building between Antibes and Toulon offering stunning panoramic view over the Bay. The modern maritime museum, set up in the donjon, allows visitors to discover famous figures and heroes as well as the daily lives of men and women who shaped over the centuries the Saint Tropez of today. 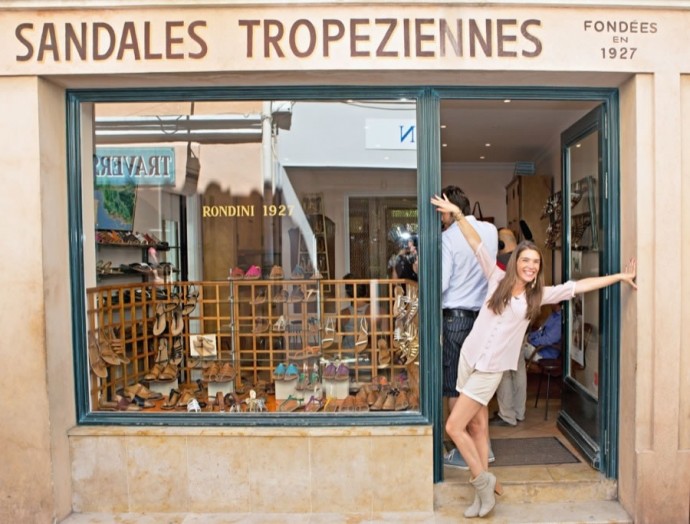 Best One Stop Shop: Rondini: tailor-made sandals
For 80 years, the Rondini Family has been making the legendary leather sandals, being Saint-Tropez first-ever sandal cobbler. Its handmade production attracts people and customers from various places in the world.
It was set up in 1927 with one model which has grown and flourished into the thriving business it is today offering a variety of models. Patrons of the brand include Colette and Marlène Dietrich. 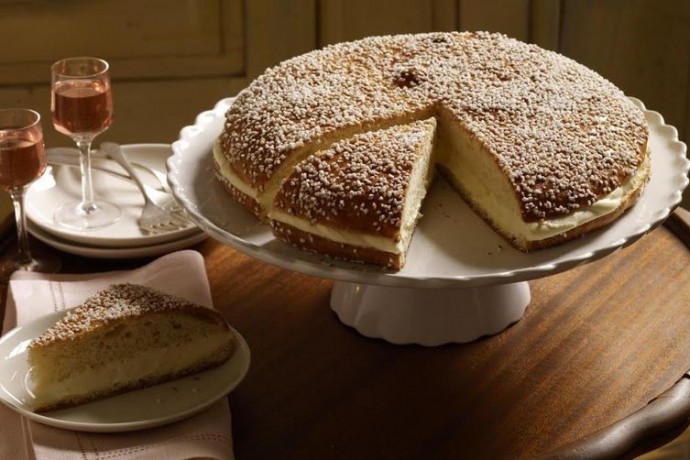 Best local Secret: The recipe of La Tarte Tropezienne
“Often imitated, never matched” the real Tarte Tropézienne, the creator A. Micka created in 1955 has always been an essential product Tropézien symbol of pleasure, holiday and sunshine. 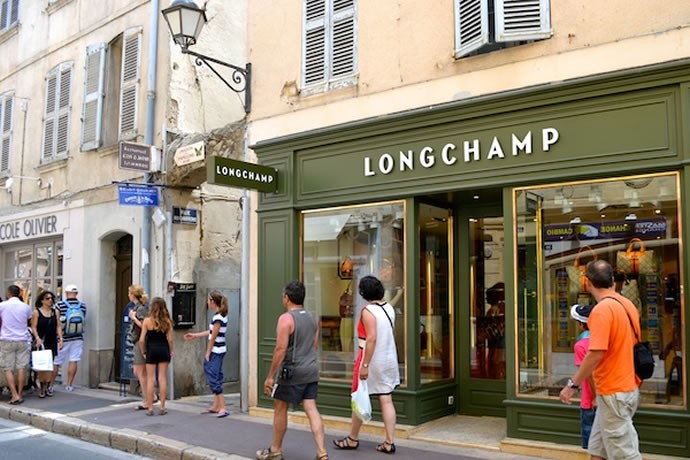 Best place for local Shopping:
Saint-Tropez is the capital of shopping on the Côte d’Azur with its boutiques, all the best brands in fashion or its world famous crafts and specialties.

Thus, in the triangle between the Place des Lices, Rue Gambetta and Rue Allard you will find exactly the same retail opportunities as in Paris, London or Rome. In St Tropez, though, they are attended by seaside insouciance.
In other words, the resort has all the shops which villagers require – butchers, bakers, newsagents – but with the world’s leading designer outlets grafted on. 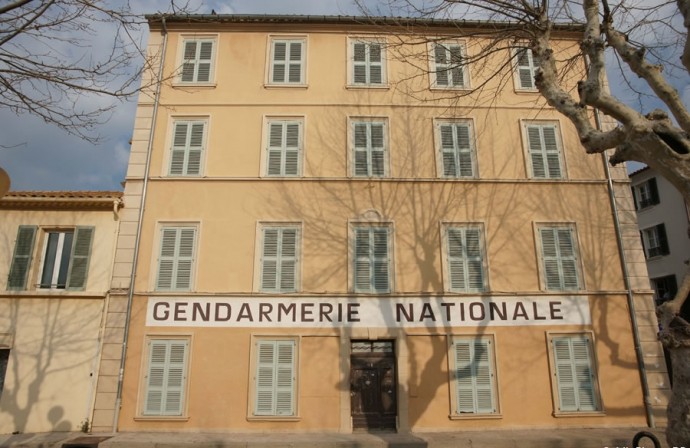 Best cultural secret: La Gendarmerie
This former police station where films have been shot is as exquisite as it is intricate. Its 11th century façade is definitely one of the most famous buildings in France. It rose to international fame through the film Le Gendarme de Saint-Tropez.

Top architectural Find:
Le Latitude 43: Built in 1932 by the worldwide known architect Georges-Henri Pingusson, this hotel was classified on the inventory of historical monuments in 1992. This atypical building was completely restored and converted into apartments in 1998 by Cecile Briolle, Claude Marro and Jacques Repiquet, achitects. Today, the Latitude 43 accounts as an international benchmark for contemporary architecture. 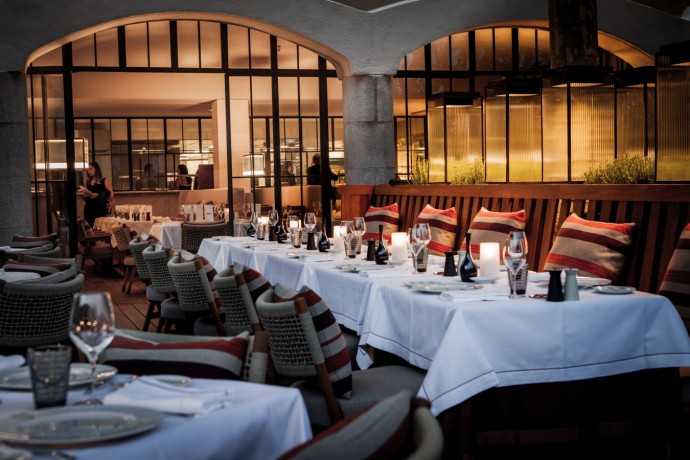 Best restaurant for a Celebration: Rivea by Alain Ducasse
Rivea at Byblos offers authentic Mediterranean fare using fresh, simple and healthy produce, all issued from neighboring lands of the French and Italian Riviera. An establishment drenched in sun, just like super chef Alain Ducasse so loves! 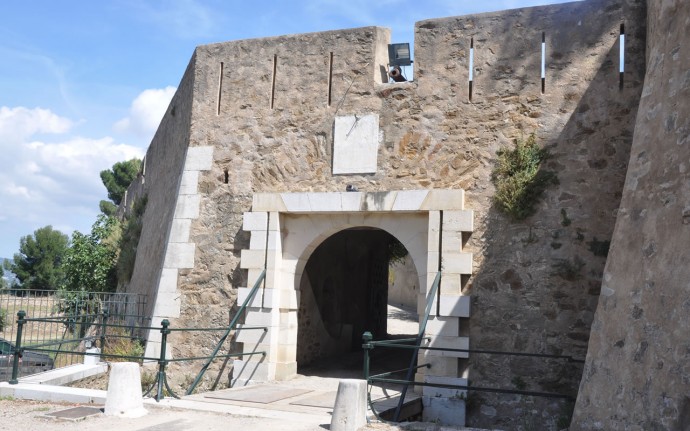 Must see Museum: La Citadelle
Composed by bastions and a hexagonal keep built between 1602 and 1608 on the drawings of engineer Raymond de Bonnefons, it is the most significant building between Antibes and Toulon and boasts stunning panoramic view over the Bay. The modern maritime museum, set up in the donjon, allows visitors to discover famous figures and heroes as well as the daily lives of men and women who over the centuries shaped the Saint Tropez of today.

MArinated in history, the citadel is located in a harmonious setting of wooded hills, accessed by following a footpath lined with eucalyptus and rosebays, where it is not unusual to find wild peacocks. Since 1958, the edifice has housed a naval museum comprising of a dozen rooms offering the visitor the opportunity to discover the naval heritage of Saint Tropez from antiquity to the modern day. The permanent exhibition presents archeological submarine equipment, models, engravings and paintings of boats, as well as a collection of documents recording the extraordinary lives of famous local people: two rooms are devoted entirely to Pierre André de Suffren, bailiff to the King, and Jean-François Allard, an officer under Napoleon who became generalissimo of the forces of an Indian Prince.

Access to the upper terrace of the museum offers visitors a superb panoramic view. Looking towards the sea the view of the Gulf of Saint-Tropez and Sainte-Maxime is extraordinary with a combination of jagged rocky coastline, headlands, bays, creeks and islands. Looking inland, when the hot mistral wind is blowing, the view spans both snowcapped mountains and the red rocky landscape of the Estérel hills. On the terrace, four Spanish cannons seized from the enemy continue to symbolically scan the horizon in anticipation of an attack (that will no longer materialise, of course).