Why Bhutan?
People often asked me this question when I decided to visit this soulful nation. Sandwiched between India and China, Bhutan doesn’t have pristine beaches and neither is it a shopping or leisure destination. Falling on the Himalayan ranges, it is an untapped nook of natural beauty. 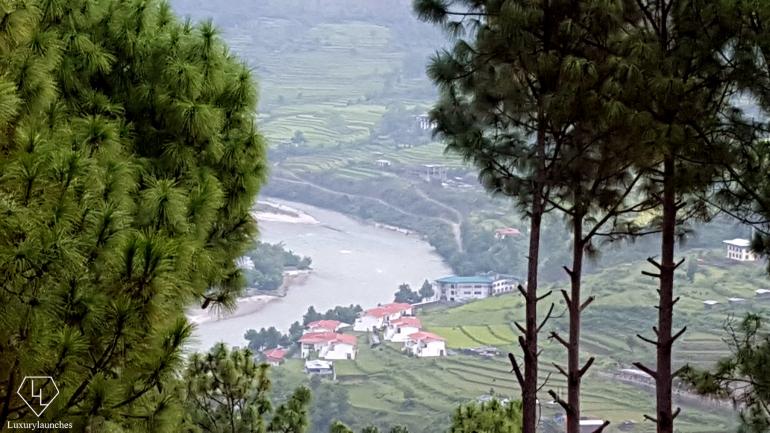 I flew into Bhutan from New Delhi – one of two ways to enter the country. There are daily flights from Delhi to Paro via Druk Air, the official carrier. On road, there are three points of entry from India – Phuentsholing, Gelephu and Samdrup Jongkhar.

Paro Airport is situated in a deep valley, cushioned on all sides by mountain peaks. The weather was clear, with slight showers; and the flight was smooth and short (2 hours to Kathmandu and from there 50 minutes to Paro). The landing was fine, and the view – just breathtaking.

Immigration and baggage gets done at lightning speed. The staff is brisk and doesn’t waste time.

Outside, my friend and I were greeted by the smiling face of Dechen (dey-shun), tour guide with Heavenly Bhutan – our tour operator/ground handler, and a most entertaining companion on the trip, dressed in kira. The nationals, by rule must dress in the traditional kira (women) and gho (men).
The air was chilly with a slight drizzle, but the stunning view made up for these petty discomforts.

Although a culturally dense nation, we had sketched our itinerary to the south east of Bhutan, keeping three main cities on our radar – Paro, Punakha and the capital city, Thimphu. 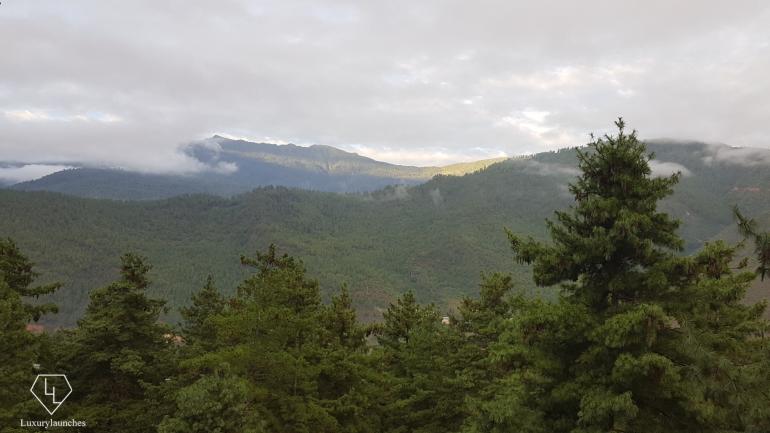 Our first layover was at the COMO Uma Paro, a sprawling hideaway, situated high up in the mountain with panoramic views of the mountains and the town below. Cedar is the national tree of Bhutan, but the property had a striking school of pine trees across its property.

We were welcomed by friendly, and handsome, smiles by staff who rushed to help us with our luggage. As we waited for check-in, we were treated to some brilliant freshly-brewed and piping hot ginger tea. 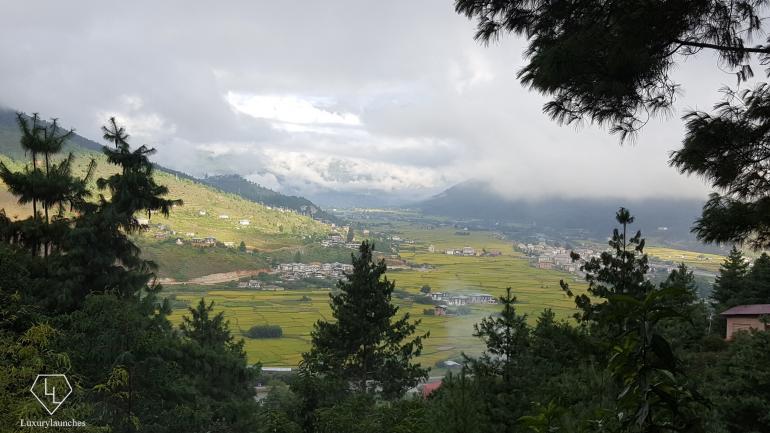 Our room left us spell bound. The view looked like a life-size wall painting. Big, square windows opened out to this painting-like scenery. The trees, the sky, the mist, the faraway brooks, stone cottages and the majestic Himalayas – it was surreal.

After freshening up, we decided to check the town and catch a bite. Paro is a quiet town. Famished from a long day of travelling, we wanted to try out some authentic Bhutanese cuisine which so many Igers sang praises about.

On voicing our wishes, Dechen took us to a restaurant. Enroute, she made a quick call to the restaurant and placed an order lest we reach and wait for a long time for the food to be prepared. We were pleasantly taken aback with this gesture because of how homely it was. And lip-smacking wonderful! Our hungry souls were satiated. 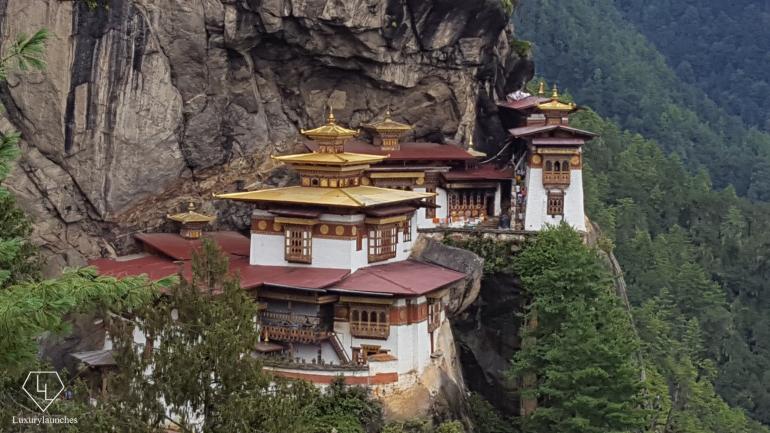 Early next day we left for Bhutan’s claim to fame, the renowned Tiger’s Nest – a monastery perched on a mountain at 3100 ft above the Paro valley. Locally known as Paro Taktsang, it is the holiest and one of the most popular sites in the kingdom.

It is a beautiful structure believed to be built in 1692 and constantly renovated. The story says that Guru Rinpoche or Padmasambhava (head of Buddhism in Bhutan), flew on the back of a tigress to this site in the 8th century and meditated in these caves for three months. The monastery is a labyrinth with a few shrines within the complex. Monks sit in prayer, or meditation, with the backdrop of the magnificent mountains.

You will have to hike to the Tiger’s Nest. For someone who finds it difficult to see clearly after taking three flights of stairs, I would have fainted after the first half hour. It took us close to three hours on the path that winds, twists, turns and climbs to finally reach the regal monastery. For those who cannot walk, there are donkeys that can take you for three quarters the distance. 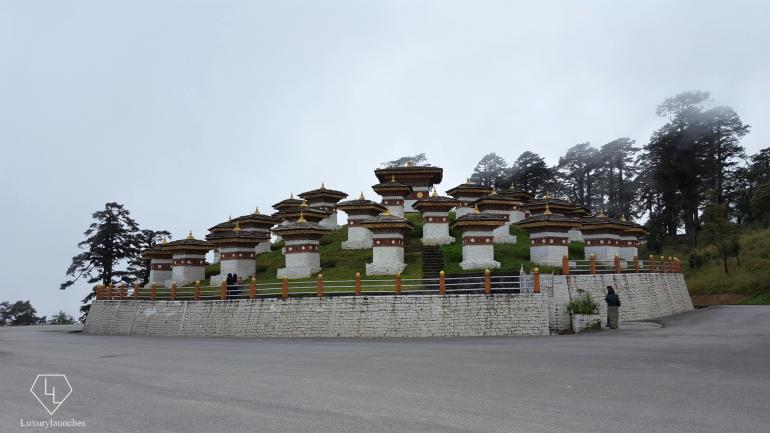 Next morning, I was limping – literally, but thanks to Dechen and a walking cane, all set for our long trip to Punakha. It was a rough road that took us a little over 4 hours.

On the way comes Dochula Pass, a war memorial with 108 memorial chorten or stupas and from here, you can see the tip of Mount Everest. As we drive into the valley of Punakha, the first indications are the phalluses and the vast fields of rice. 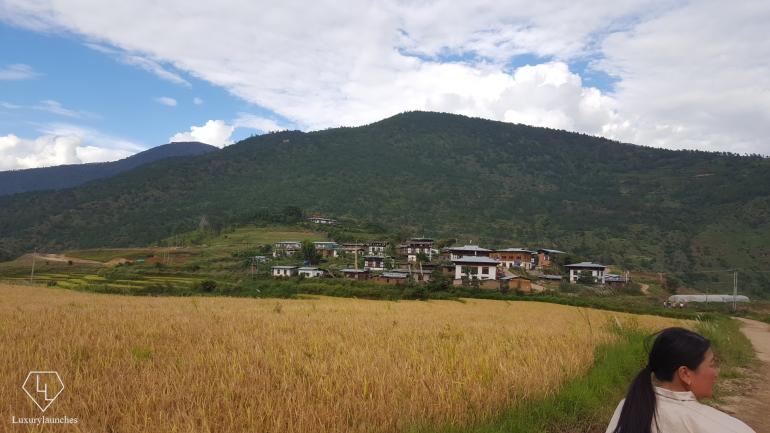 Oh, Punakha.
What a beautiful place, running through paddy fields, staring at the dancing clouds in a bright blue sky and happy faces of people who looked like they were having a “ball of a time”. Now, I say that with a pun intended because Punakha also has a very queer belief. 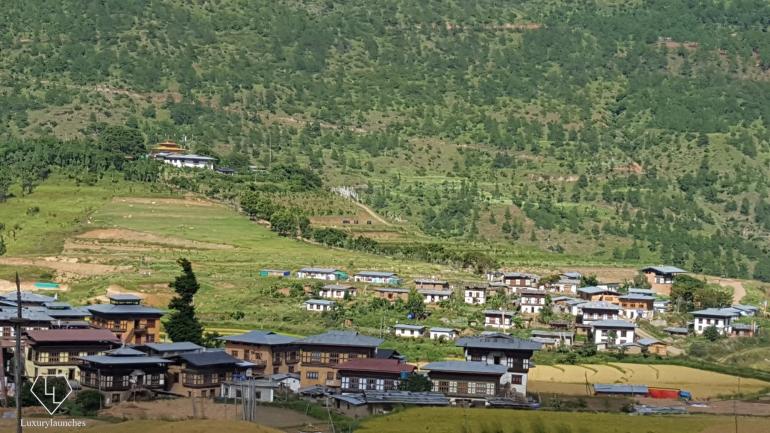 The “divine madman” or the maverick saint Drukpa Kunley believed in “unorthodox ways of teaching Buddhism through music, humour and outrageous behaviour.” The Chimi Lhakhang is a shrine in honour of this saint. The monastery is also considered to be the temple of fertility and is often visited by couples who pray for children. If you visit the temple, don’t be offended to be struck on the head 10 times by a wooden phallus to ward off any “evil eye and malicious gossip”.

Yes, bizarre.
Our camp spot for the night was the Densa Punakha, a beautiful and luxurious resort. The view was unmatched, of course. Densa’s architecture is best described as contemporary rustic with the use of natural elements.

The resort is built in a terraced format, perched on the edge of a hill. Rooms look out to the property as well as the hilly terrain beyond. An organic farm produces fresh fruits and vegetables that the hotel uses in its kitchen, giving guests a natural, healthy treat. 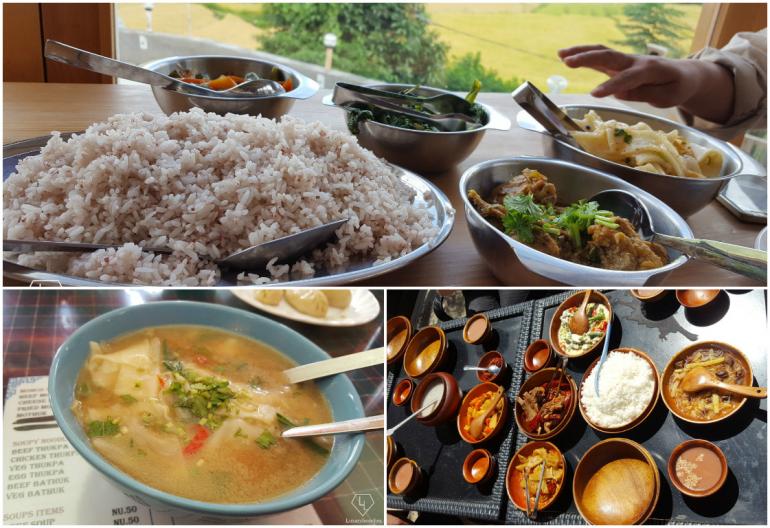 Bhutanese cuisine has influences from India, China and Taiwan. The curries are spicy and the brown rice is in abundance. The national dish is ema datshi (chilli cheese) and comes in many variants like kewa (potato) and shamu (mushroom). Vegetables are the primary choice but pork, beef and chicken are also popular.

Next day was our travel to Thimphu, a shorter 2-hour drive to the most happening city of the country – its capital. 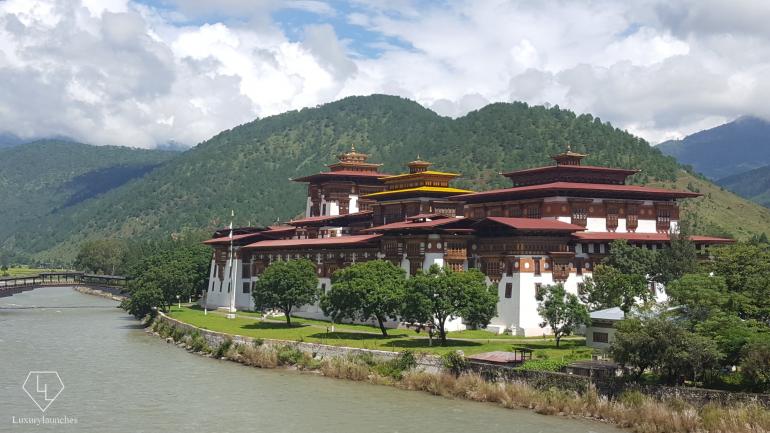 On the way, we made a short stopover at the Punakha Dzong, the former administrative centre of Bhutan. Jacaranda trees light up this structure which is built at the confluence of Mo Chhu and Po Chhu – mother and father.

A shift from rural to urban landscape is apparent as we drew closer to Thimphu. More buildings, more shops and lesser trees were the first signs of entering an urban development.

For the last stretch of our trip, we chose a city hotel to bring our head back from the air and touch ground. This was not a good idea, because our choice was the first hotel in TripAdvisor – Hotel Norbuling. It was conveniently located, but the service was average and the facilities were poor.
There are many other options and the most comfort and luxurious remain the Taj Thimphu, an exclusive property right at the heart of the city.

Thimphu is a progressive city, trying to adapt as much of a modern standard of living as its traditional belief system permits. Art, culture and hospitality forms much of the livelihood while tourism is a rapidly growing sector. Indians form the highest number of tourists visiting Bhutan, with Nepalese and Chinese following lead. Visitors from the west are minimal due to visa restrictions as the kingdom is regulated under a policy called “high value, low impact tourism”.

Except for Indian, Bangladeshi and Maldivian passports, all foreigners must use a licensed tour operator to pre-arrange a visa and on arrival it will be stamped on their passport. This is part of the government’s initiatives to limit the number of tourists to the country and prevent it from being “overwhelmed by mass tourism”. 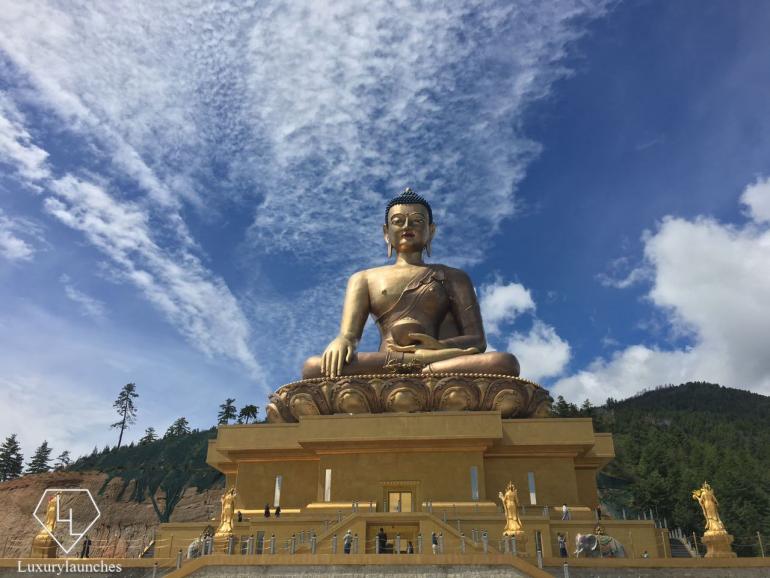 Thimphu has several sights to visit, mostly of historical, religious, cultural and artistic significance. The ginormous Budhha Dordenma takes a large portion of the pie. This was a gift to Bhutan by an affluent businessman from Hong Kong and remains perched high up on a hill that looks out to the entire city of Thimphu.

Memorial Chorten is another attraction, where hundreds come to offer prayers and meditate, even in the midst of thronging tourists. Other places of interest include the Royal Textile Academy, the Clock Tower, National Folk Heritage Museum and Changangkha Lhakhang, a 12th century temple visited by parents bring their new born babies to be blessed and named.

We ended out day trip of sights with a visit to the national reserve park of Bhutan’s national animal – the takin – a goat-antelope which looks like a mixed breed of a sheep and a buffalo, and found in the Himalayas. 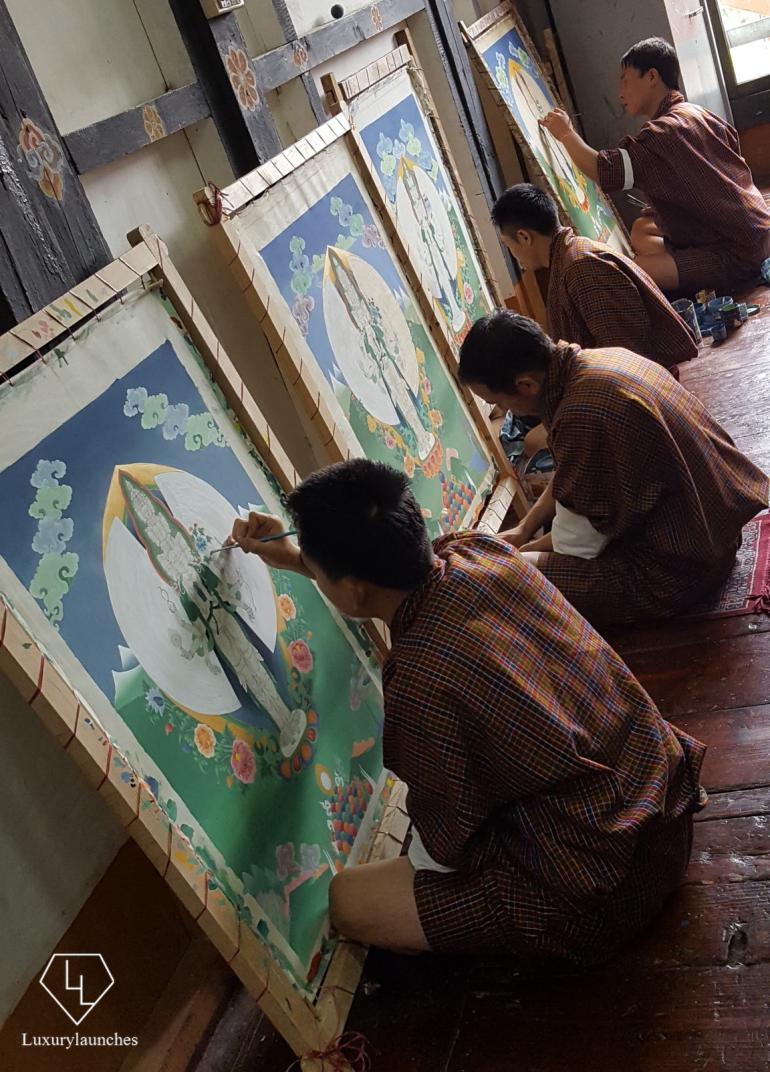 There are many things you can take back home from Bhutan – striking pieces of art, figurines of Buddha, spices, charms, jewellery and so on. But what will remain etched in your heart for a long, long time is how the mountains embrace your soul from the moment you touch down in Bhutan to the time you float through a sea of clear clouds, homewards. 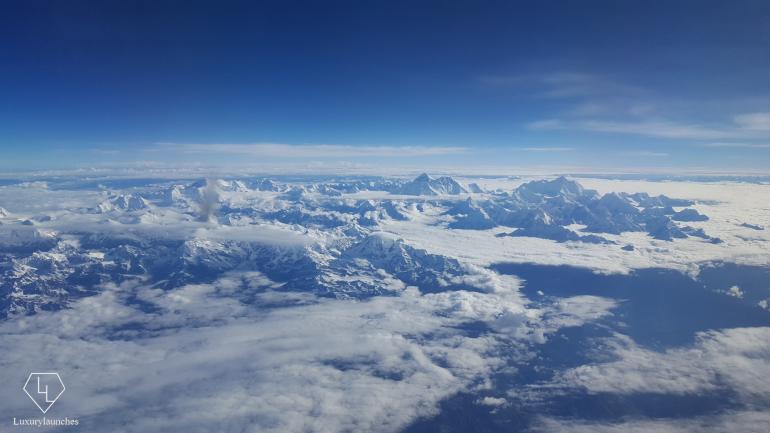 There is nothing exciting about Bhutan, but absolute stillness and peace. Occasionally, I have stood frozen, staring into the picturesque mountains and wondering why I couldn’t have been here any sooner. And this is why Bhutan.

Tags from the story
Bhutan