Getting to the top is tough; staying there is even tougher, and Tom Cruise has proven himself over and over. Tom Cruise flies higher than the rest of us as his Gulfstream IV arcs through the air at 45,000 feet, almost 10,000 feet above most commercial aircraft. By most accounts, the man is generous and self-effacing, but when he’s flying, he looks down on people. Other celebs like Steve Jobs, Larry Ellison, Mark Cuban, and John Travolta also fly Gulfstream- alpha-male plane for decades. With Gulfstream, you can go around the world in one stop. Disturbed at the devastation of Katrina last year, Travolta decided to help out, so he flew down five tons of supplies. Except that he made the trip in his other plane, a customized Boeing 707.

Most of these titans of industry own Boeing Business Jets, which are modified 737s. They include Rupert Murdoch, Kirk Kerkorian, and the prime ministers of Australia, Malaysia, and Nigeria. These are essentially flying 800-square-foot apartments, replete with master bedrooms, en-suite restrooms, and banquet halls. Customizing is the most exclusive option, all new Boeings orders are delivered “green,” without any interior detailing; that’s when the creativity starts. Gulfstream and Boeing aren’t the only options, of course. Oprah Winfrey travels at just under the speed of sound in her new Canadian-made Bombardier Global Express XRS. So does Celine Dion, and Cirque du Soleil founder Guy Laliberté. Harrison Ford is partial to his trusty De Havilland Canada DHC-2 Beaver, while Sydney Pollack flies his own Citation X. 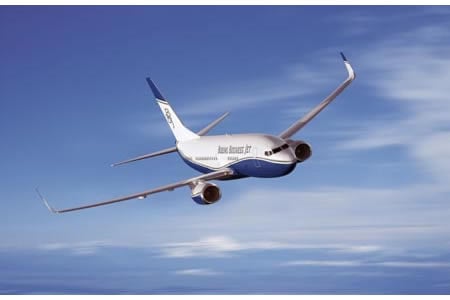