Swarovski crystals studded MSC Splendida is yet another indication of the growing popularity of luxury cruises in Europe. Though luxury sea cruising had died down for some time, the grand-daddy of expensive pastimes is here to stay, and this was made clear when Sophia Loren performed the role of godmother when MSC Splendida set sail from Barcelona in July 2009. Though it has been quite a while since the luxury ship started to take its passengers on journeys filled with opulence and extravagance, you would need to know this is no ordinary luxury ship. 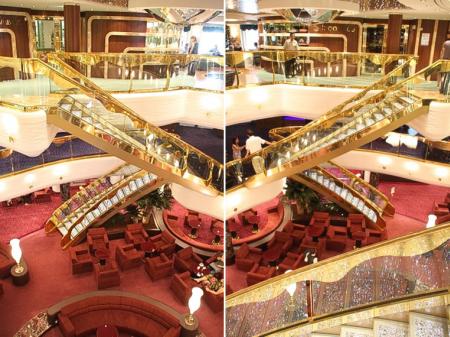 The ship is being touted as the most beautiful cruise ship in the world and this claim is substantiated with each of the 72 steps in the reception area glittering with Swarovski crystals worth $40,000. That would make the entire staircase studded with crystals worth $2.8million in total! While this is the most beautiful ship in the world, Royal Caribbean International‘s cruise ship was being touted as the world’s largest!
Via: Ship Parade/Brisbane Times