London City Airport’s #NoFilter project has been championing original travel photography by asking travellers to share their favourite unedited images of European cities. Madrid was first up, a natural choice thanks to its many architectural and cultural attractions. Find out more about Madrid with our tips on where to discover the true character of the city: 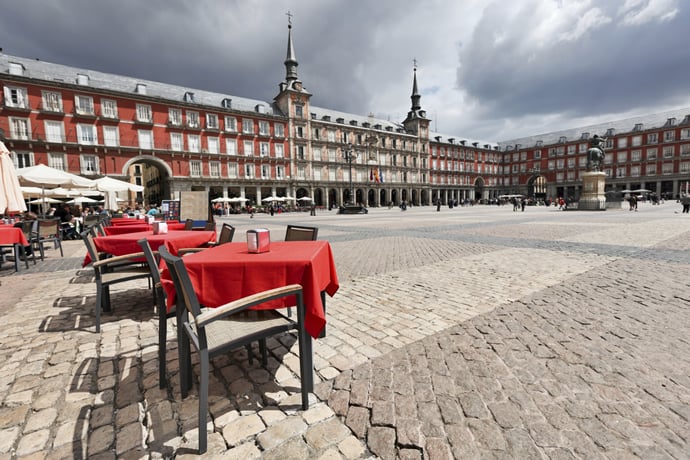 Tapas and Tempranillo
Those wanting to extend their culinary horizons should check out Madrid’s growing food and wine scene. Ir a tapear (going out for tapas) is a fine art in Madrid and there sheer choice of mini gastronomic delights available has helped Madrid build a reputation for being one of the new culinary capitals of Europe. To make the most of your encounter, avoid the inflated prices and unauthentic experience of the tourist traps and go where the Madrilenians go for an authentic experience. The barrio of La Latina and the streets around Plaza Mayor in inner Madrid offer a wealth of tapas bars all in close proximity to each other. With delicious food must come delicious drink, and Madrid’s wine making region – Vinos de Madrid – is famed for its rich and fruity wines. The Tempranillo red grape is used widely throughout Spain, extensively in the Mentrida & La Manche regions of Madrid, and is the prominent grape in Rioja. The Malvar, Garnacha and Albillo grapes are most widely used in white Madrilenian wines. Whether you’re drinking red, white or rose, we recommend you go for wine by the glass rather than the bottle. The idea of a tapas tour is to keep moving, and in Madrid you’re lucky that the ranges of wines by the glass are usually excellent.

Glamorous Nightlife
The recent successes of the Real Madrid Football Club (who can forget their Gareth Bale signing for a record breaking $132 million contract) has drawn in affluent football fans to the city and developed Madrid’s offering of stylish bars and exclusive nightclubs. Spain has more bars and restaurants per person than anywhere in the world, which becomes very apparent when you visit Madrid’s Santa Ana and Huertas districts. Discover for yourself Madrid’s extensive choice of rooftop terraces, flamenco bars and theatrical venues in this part of the city or for fancy fine-dining head to the oldest district in the city, Los Austrias with its choice of trendy wine bars and lavish restaurants. Start with drinks at the Museo Chicote (Calle Gran Vía 12) whose founder is said to have invented over 100 cocktails! Back in the day, this bar was visited by the likes of Grace Kelly and Frank Sinatra, and nowadays it attracts top DJ’s to listen to cozied up together on the long curved benches. Find out more about Madrid nightlife here.

For a Romantic Stay

Oyster and Champagne Bar: The Glass Bar serves up champagne and oysters to Madrid’s elite circles. Perfect for a decadent evening together, Glass Bar’s elegant décor sets the scene for a very special night.
El Capricho Park: One of Madrid’s lesser known parks, El Capricho is only open at weekends and holidays. This mysterious 18th century style garden is perfect for a romantic walk where you can just forget the rest of the world.
ME Hotel in Madrid: Proudly positioned in the city’s bustling Plaza de Santa Ana, this dramatic building is a haven for couples, with cocktails for two available and incredible panoramic views over the city.
Take a whirlwind tour of Madrid with these unedited images, courtesy of the No Filter Madrid project. 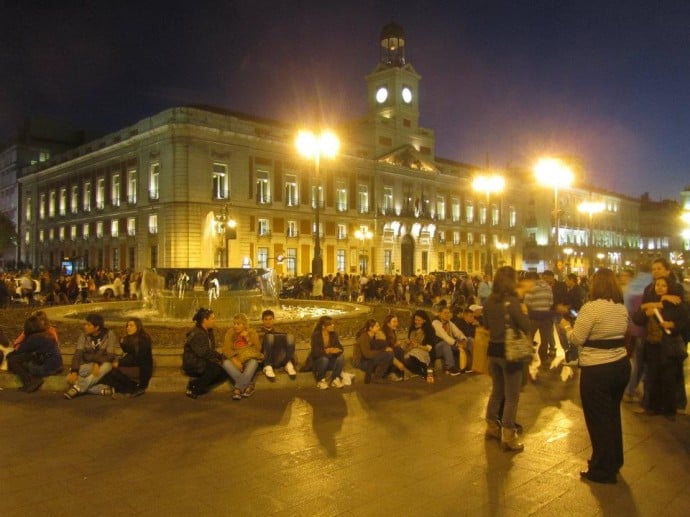 Puerta del Sol via Beyond Blighty: “As the sun sets, there is an area of the Puerta del Sol, between the fountain, the statue of a bear and a Madroño tree, that is the meeting spot of choice for residents and tourists alike.” 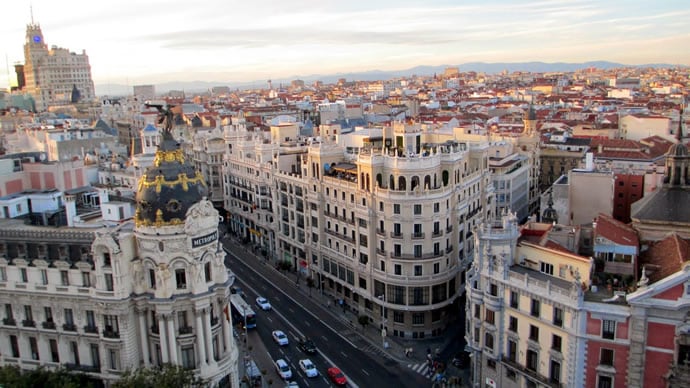 Circulo de Bellas Artes via Peachy Sangria: “Rooftops are perfect for taking photos of the same subject from different angles. You´ll be surprised by what you will find when you change perspective.” 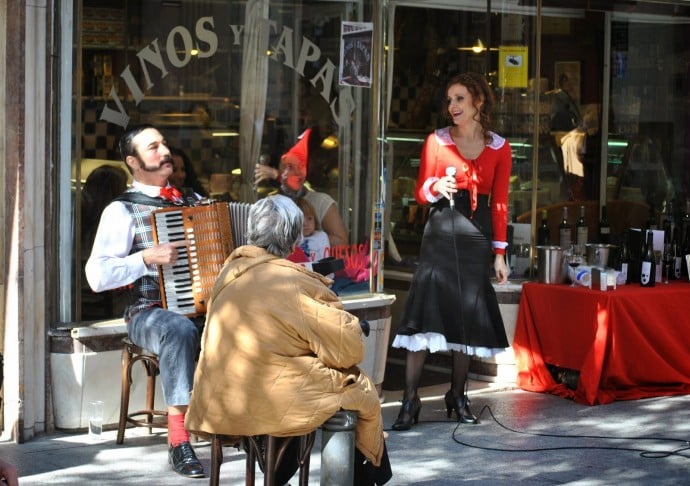 A street in Barrio de las Letras via Fish Out of Water: “Music, wine and tapas! When it’s warm everything is brought out on to the streets in Madrid…and everybody gets involved! This photo was taken in the streets around the Barrio de las Letras, which literally translated means the Neighbourhood of Letters. Many of the streets are named after famous Spanish writers such as Cervantes, Lope de Vega and Francisico Quevedo. It’s one of the nicest areas to go and eat, drink and be merry especially on or near the Plaza Santa Ana or the street Calle Huertas.” 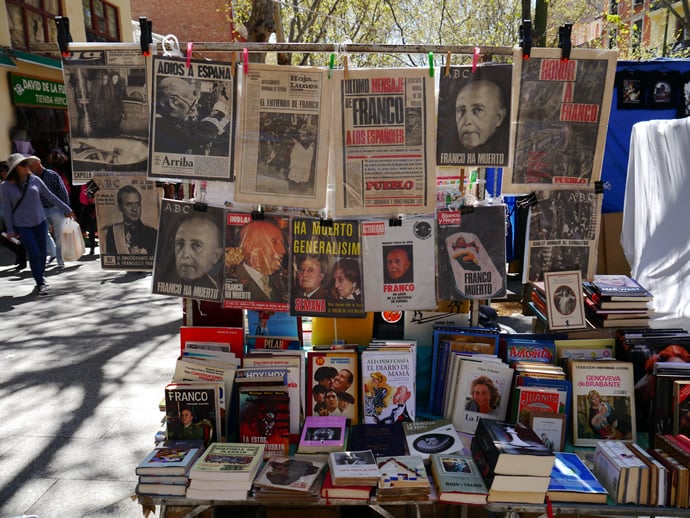 El Rastro Market via The Well-Travelled Postcard: “This photo shows newspapers of Franco’s death in El Rastro market: take photos of interesting objects that tell a powerful story, and then the aesthetic qualities aren’t nearly so important.” 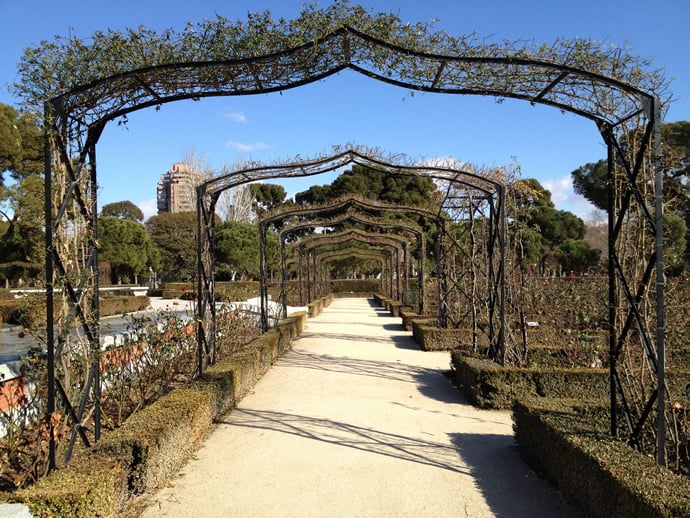 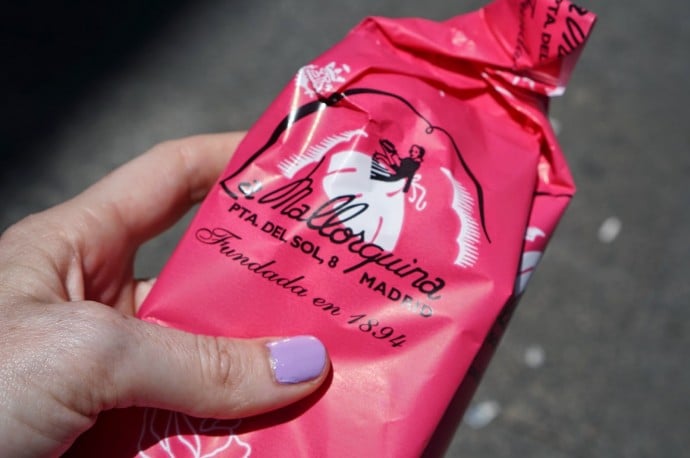 La Mallorquina Wrapper via The Town Mouse: “These little chocolate-filled pastries make up part of my story in Madrid. When I first moved to Spain, I was all alone, wandering around the center aimlessly. As a little pick-me-up, I would indulge in aneopolitana from the famous La Mallorquina in Puerta del Sol, not knowing they were famous.” 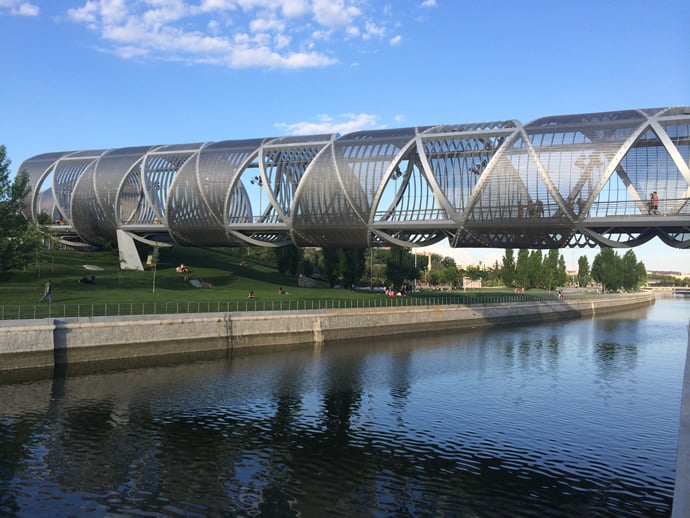 Arganzuela Bridge in Madrid Rio Park via Samantha Strate: “One of my favourite places in Madrid is right in my neighborhood. I live next to the Manzanares river and the Atlético Stadium. There is a path for runners, bikers, walkers, and rollerbladers.” 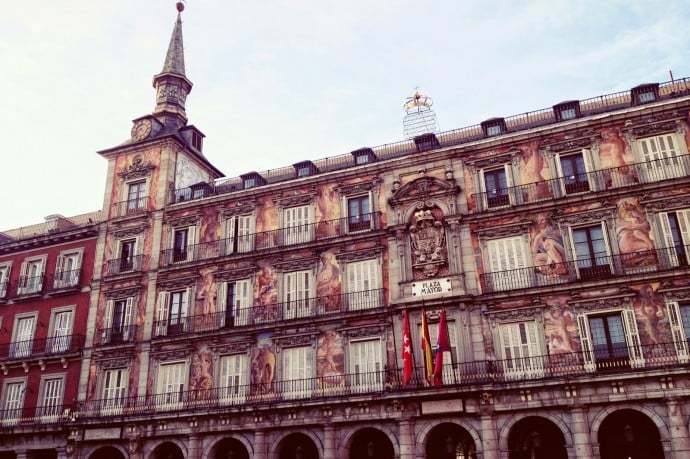 Plaza Mayor via Peachy Sangria: “Take advantage of natural lighting, even if it’s cloudy. The flash feature on smart phones can make subjects look over processed.” 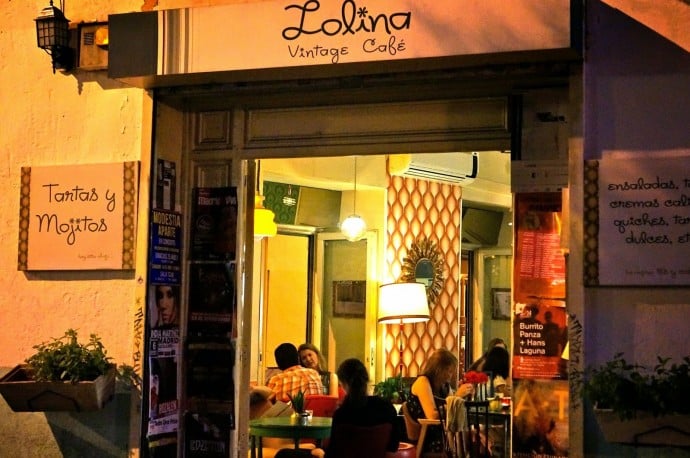 Lolina Café via The Town Mouse: “The people and the nightlife are truly Madrid’s greatest attraction, more so than the bear statue in Sol or the Palacio de Cibeles. So take your camera to the streets, piddle around in the Malasaña neighbourhood, and enjoy the Spanish chatter pouring from the glowing bars.” 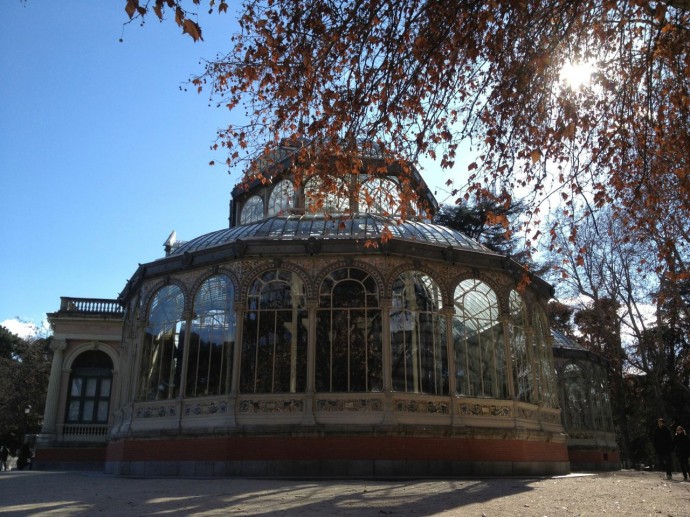 Palacio de Cristal via Seek New Travel: “Keep in mind that taking a photo into the sun is usually not a good idea, unless of course you’re getting some cool rays or a shadow effect on your main subject! Like this light coming through the soft leaves in front of the gorgeous Palacio de Cristal.”

Tags from the story
Madrid