With Britain gearing up to host the 2012 Olympics, the entire world has its eye on the nation and its run-up to the games. The latest on the front is that British Airways will be flying the Olympic torch from Athens to the UK on a gold-painted A319 jet! Yes, the Olympic flame will soar up in the skies in a gilded bird aptly christened “the Firefly.” The Civil Aviation Authority (CAA) has given British Airways permission to carry the flame on the four-hour journey from Athens to the Royal Naval Air Station (RNAS) Culdrose near Helston, Cornwall.
The torch will be safely stored in a Davy (safety) lamp, strapped across two seats on board. The other passengers on board include David Beckham, London 2012 chairman Seb Coe and several other dignitaries. It will mark the beginning start of a 70-day torch relay around the UK when the plane lands.
As the Olympics near, more and more events and offerings are expected to be unveiled. British Airways will also fly passengers in “dove” themed planes during the Olympic season. 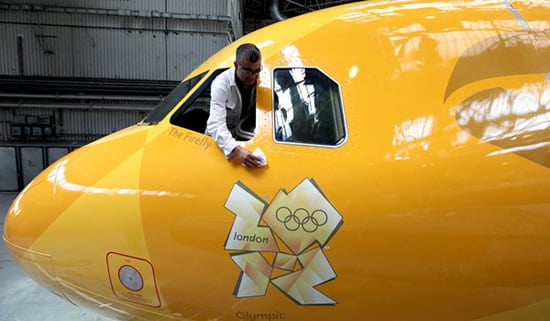 Tags from the story
British-Airways, Olympics