What’s the scariest movie you have ever seen? If a scary movie can terrify the daylights out of you, then it breaks our heart to uncover the fact that our life is soon going to be more terrifying than a horror movie if we don’t take care of climate change and its many perilous after-effects. To emphasize this urgent matter, Greta Thunberg’s global climate change movement, Fridays For Future, has issued a video aimed at galvanizing public action on the environmental crisis we all face. This endeavor slams space agencies and governments for using billions of dollars to visit other planets when the focus needs to be shifted to our Planet Earth that’s clearly crying for help right, left, and center. The splendid satirical tourism ad for the Red Planet is aimed at the ‘one percent,’ suggesting this group should escape from Earth and leave the 99 percent to stay and fix climate change.

The ad highlights the many plus points of Mars-like no war, no criminality, no pandemics, and no pollution but also highlights the fact that most of us belong to the 99% and won’t have the liberties of dollars to make it out of here. The moral of the story- fix climate change and salvage what we can before it’s too late (which is, in a way, already is). The impactful ad has a narrator stating the obvious in a satirical tone -“Mars, an untainted planet, a new world. We can begin again. Mars offers the ultimate freedom. Freedom to pave the new path for humans. Freedom to create a new way of life. Freedom to forever change the course of humanity. Will you spend the rest of your years on Earth, or will you be a pioneer?” 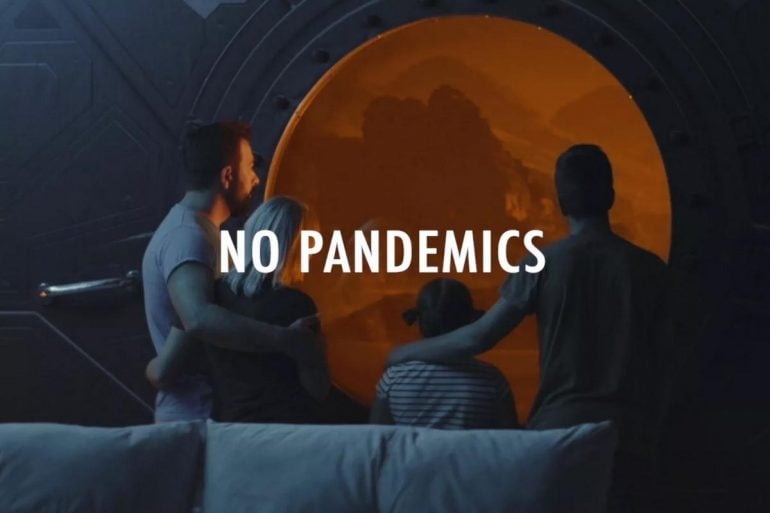 The ad ends with a jarring reminder- “And for the 99% who will stay on Earth, we’d better fix climate change.” Fridays For Future released the film as a critique of NASA’s enormous financial expenditure on its Perseverance rover due to land on Mars on February 18. Imagine if all that wealth plus Elon Musk’s moolah is spent on Earth instead of planning inhabiting Mars, we could put off our impending doom for so many more years. A press release stated, “We wanted to highlight pure nonsense. Government-funded space programs and the world’s ultra-wealthy 1% are laser-focused on Mars (NASA’s Perseverance Rover alone cost $2.7 billion for development, launch, operations, and analysis) – and yet, most humans will never get a chance to visit or live on Mars. This is not due to a lack of resources but the fact that our global systems don’t care about us and refuse to take equitable action. With 99% of the world’s population remaining on Earth, it’s imperative that we fix the climate change that’s destroying our home planet. We’d better fix climate change now. We have no choice.”

Tags from the story
Climate-Change