You know what Disney World is for children, don’t you? I think that is what Dubai aims to become for mankind. It is on its way to become a gigantic amusement park. Once you are inside, you will get lost in all its wonders and then never want to leave. What else can we make of all their innovations and aggressive ambitions? One of the latest, an underwater Tennis Court. Yes, so we have heard them exploring underground already with suites, but a tennis court? Can you imagine the magnitude?

This is not some fantasy script, and we are not mocking Dubai, god forbid, but here’s the news. A Polish architect Krysztof Kotala has proposed an underwater tennis complex that could be built between the Burj Al Arab and the Palm Jumeirah Islands. This proposal was made by Kotala, an alumnus of London’s Royal Institue of British Architects, Poland’s Krakow Polytechnic and Münster University of Applied Sciences in Germany. 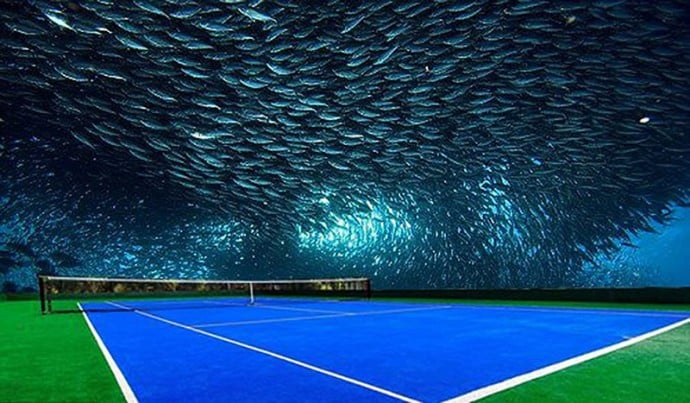 The intention is entertaining – to create a natural atoll. The complex will be a sports arena with seven courts and an aquarium, both looking up to a rooftop coral reef. It is hard to picture a game in this setting. People would keep staring up instead of the patent right-left tick-tock motion. For instance, people (not children, they wouldn’t peel away from watching the fish) would be perched at the edge of their seat watching a nail-biting round, and all of a sudden a huge octopus scrawls over the reef and suddenly the court freezes. Well, it might not be as dramatic, but no harm in a bit of daydreaming. The designer is quite ambitious about this, hoping to see the fifth Grand Slam take place here. Personally, I will just catch it on TV. A drive into Atlantis from the mainland through the underwater tunnel makes me gasp for air.

Tags from the story
Concept, Dubai