MC Escher, the artist more popularly known for his never-ending staircases and for snubbing the Rolling Stones – will present his first major exhibition in London. Escher’s instantly recognizable images have sold in millions and been widely imitated in advertising, opens this week at the Dulwich Picture Gallery in London. While his work is adored by most, he is infamously known for snubbing the Rolling Stones when they requested an album cover – and by mathematicians, doctors and dentists but always been ignored by museums and major galleries, the curators say. 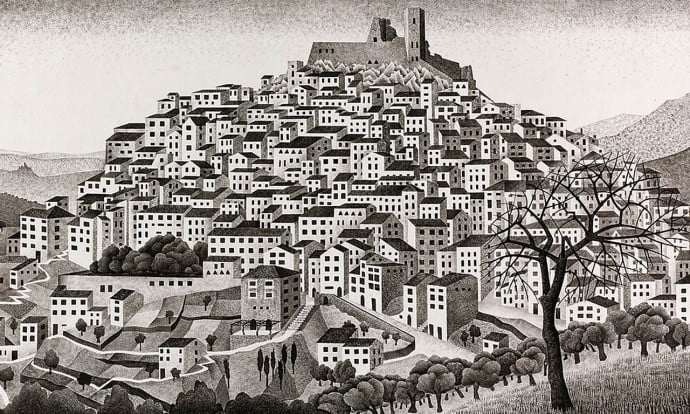 There is currently only one Escher in any UK public collection – at the Hunterian in Glasgow, a print that was left on a geography professor’s office wall.However look at any humble student’s abode and you would almost surely find a poster of a Escher’s hands drawing each other, or his glum figures trudging up an impossible staircase turning at right angles and continuing wearyingly upwards into eternity. 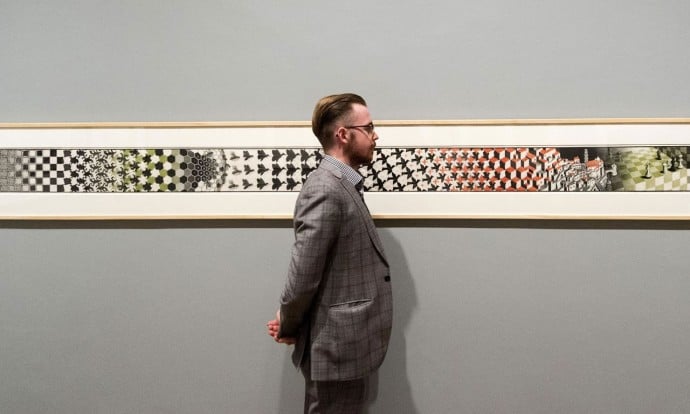 Escher is famous for his impossible geometrical shapes, landscapes where reality lurches out of kilter, and tessellating patterns where a beehive can turn into a bee, a bird, a fish and finally an Italian church. “Dentists like to put them on their walls,” she said. “They think it’s a great way of getting people engaged and forgetting about reality.”

Escher was known to hate his new fame when San Francisco hippies began pirating his work in the 1960s, and declined to create a Stones album cover because he was offended when the letter from Mick Jagger addressed him by his first name, Maurits.

Two young mathematicians who became among the most famous in the world, the Briton Roger Penrose and the late Canadian HSM Coxeter, were his biggest fans. Escher in turn was inspired by Penroses’s perspectival triangle and Coxeter’s work on crystal symmetry. The exhibition in London will feature some of Escher’s pencilled notes on an essay by Coxeter in the transactions and proceedings of the Royal Society of Canada, and the four increasingly complex prints he made emulating the crystal forms. He wrote thanking Coxeter for the essay, but insisted it was “much too learned for a simple, self-made plane-pattern man like me”.

READ:  The worlds first vegan hotel suite is now available for booking at the Hilton London

The exhibition will also cover his meticulous drawings of Italian landscapes and Moorish tiles to his final print, of snakes writhing through a disc of chain mail, made in 1969, three years before his death.