Military Bases are no longer the only places where Space Flights will be landing and taking off. The New Mexico Spaceport Authority recently unveiled the design for the world’s first public launching and landing site for space vehicles, Spaceport America. It will be the gateway to space for the Virgin Galactic and the X Prize Cup. UK architecture firm Foster + Partners and San Francisco-based engineering shop URS have been working on the project situated in the middle of the New Mexico desert. The plans include a passenger terminal and a hangar big enough for seven craft. 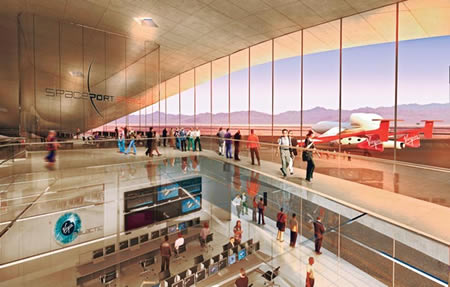 The Spaceport America project in New Mexico will be completed in 2010 costing the taxpayers $225 million. “The spaceport design had to be a vision of the future, not the past,” says Will Whitehorn, Virgin Galactic’s president. “It’s not a railroad station we’re building out there.”