The Adult magazine company Playboy is vying to take pleasure and entertainment to a new level by mapping a concept for a Playboy Club in space. The “intergalactic entertainment destination” comprises a zero-gravity dance club and Playboy bunnies with jet packs. A.J Baime and Jason Harper of Playboy Magazine have collaborated with various individuals on the project, including artist Thomas Tenery, Virgin Galactic head designer Adam Wells and former NASA scientist Stan Kent to conceptualize this idea. Their intellectual unison has brought into being the concept of a wheel-shaped space station that packs in a casino, restaurant and “orbital pleasure domes.” The restaurant would be situated in the station’s spinning section, where centrifugal force would create artificial gravity to prevent your meal from floating away.

The dance club is housed in a gravity-free zone where Playboy bunnies would zoom in jet packs to serve you beverages. There are casino and orbital pleasure domes that feature large windows to give you a good view of space to make your sexy times sexier. As of now, it’s just a fantasy, don’t get too excited till we give you any info about the actual materialization of this concept. 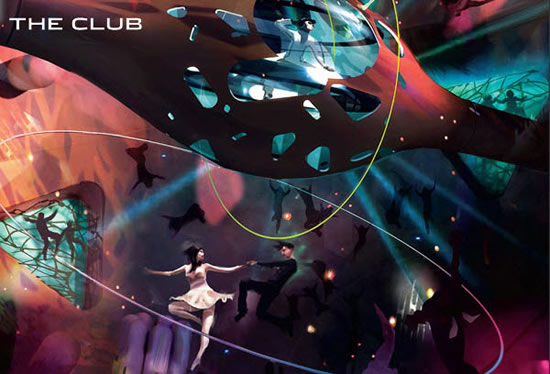