There are few sports in the world that boast the luxury and prestige of golf. The players battle it out for multi-million dollar paycheques, all the while showing off their sponsorships from the leading luxe brands on the planet, from Rolex to Hugo Boss.

The good news is that you don’t need to be able to strike the ball as sweetly as Rory McIlroy or Brooks Koepka in order to be able to feel a million dollars out on the golf course, and if you are able to secure a booking at one of these super-exclusive resorts then you will be following in the footsteps of the best players that have ever taken to the tee.

Here’s a rundown of the most exclusive luxury golf courses in the world. 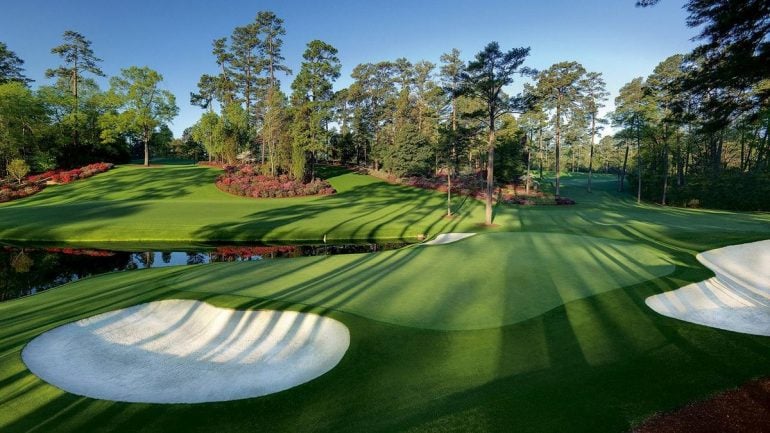 Augusta National Golf Club
One of the most recognisable golf courses in the world, Augusta hosts The Masters each year and membership is a rather sought-after thing. Designed by Bobby Jones and Alister MacKenzie, this Par 72 course has just 300 members, who include Bill Gates, Warren Buffett, and Condoleezza Rice.

Should you want to join… well, good luck with that. It isn’t open to the general public, with membership is given out on an invitation-only basis and annual fees ranging from $250,000 to $500,000.

Twitter Code:
In the likely event you never quite get to play around at Augusta, why not instead try one of the other fantastic courses in Georgia, and instead enjoy the famous ‘Magnolia Drive’ from the comfort of your own home when The Masters is on. You can watch how the pros tackle this famously difficult layout and maybe place a bet on whoever is in contention to slip into the Green Jacket. 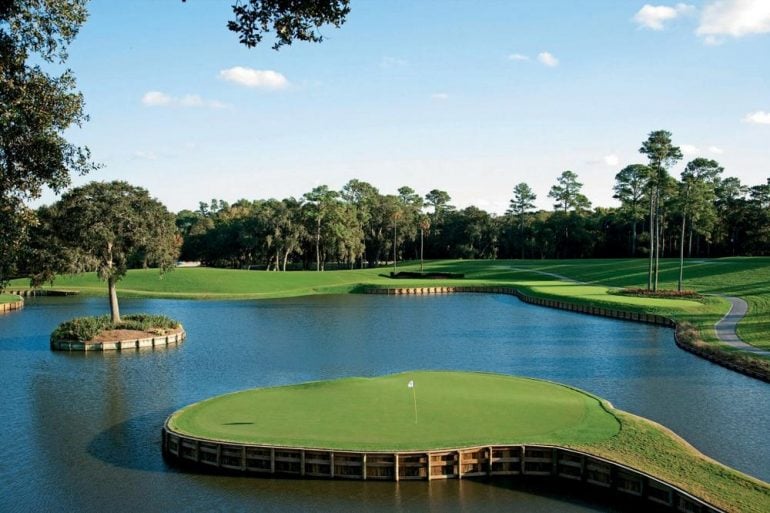 TPC Sawgrass
This publicly playable course in Jacksonville is home to one of the most iconic holes in golf: the island green seventeenth shakes the confidence of even the most skilful players. A host of THE PLAYERS Championship on the PGA Tour each year, TPC Sawgrass was designed by famed architect Pete Dye and is considered to be one of the hardest layouts to master anywhere on the planet, let alone in Florida.

Sawgrass is a layout where long, straight hitters like Rory McIlroy have thrived, but its inclusive style – with numerous doglegging holes and a myriad of hazards – also highlights why shorter, more accurate types such as Webb Simpson and Davis Love III have also lifted the PLAYERS Championship trophy.

Also renowned for its picturesque landscapes, TPC Sawgrass regularly ranks as one of the finest in North America and can be played by anybody at £310 per round. 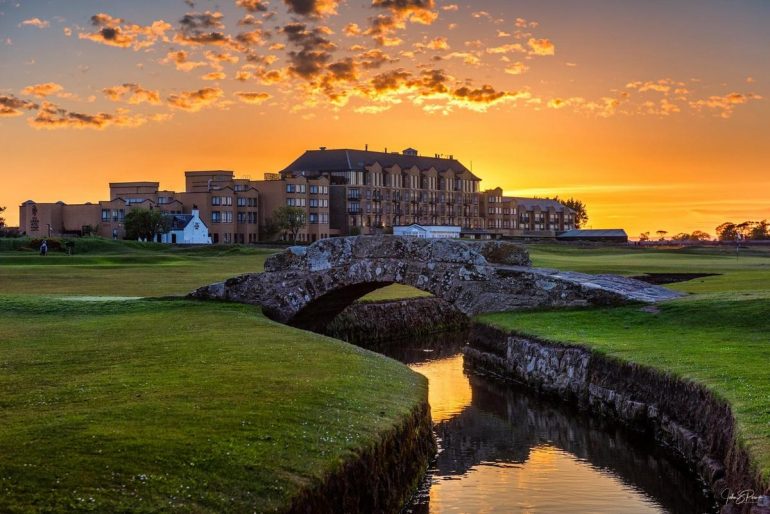 St Andrews
Widely considered the ‘home’ of golf, given that golf has been played here since back in the 15th century, the exclusivity – and the waiting list – means that actually getting to play 18 holes on the Links at St Andrews is a task in itself. Membership is by invitation only and it is believed that there are just 2,400 members worldwide – including Princess Anne.

However, there is a course not far from St Andrews that offers the same levels of luxury without the wait. Kingsbarns is one of the host venues of the Alfred Dunhill Links Championship each year and features all of the unique characteristics of a coastal track in the British Isles.

For £392, golf fanatics can play 18 holes on the course with their own professional caddy, who can assist with green reading, yardages and more. 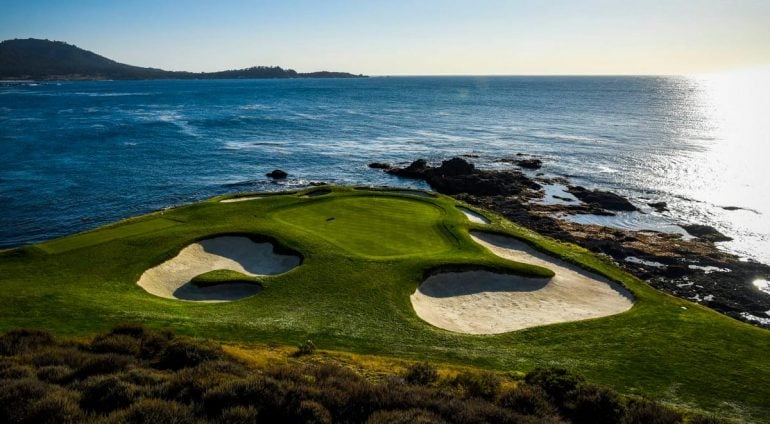 Pebble Beach Links
One of the most famous golf courses currently playable, the complexity of Pebble Beach ensures that it is the go-to track for some of the sport’s most demanding events. This coastal slice of the Monterey Peninsula hosted the 2019 US Open, won by Gary Woodland and, in the past, legends of golf including Jack Nicklaus, Tom Watson and Tiger Woods have all won majors here.

Regarded as one of California’s hidden gems, Pebble Beach has played host to some of the most famous moments in golf history. It is available for the public to play at £430 per round – making it the second most expensive course in the world, but as well as challenging your skills on the Links you will also benefit from taking in the unforgettable views across Carmel Bay and the Pacific Ocean. 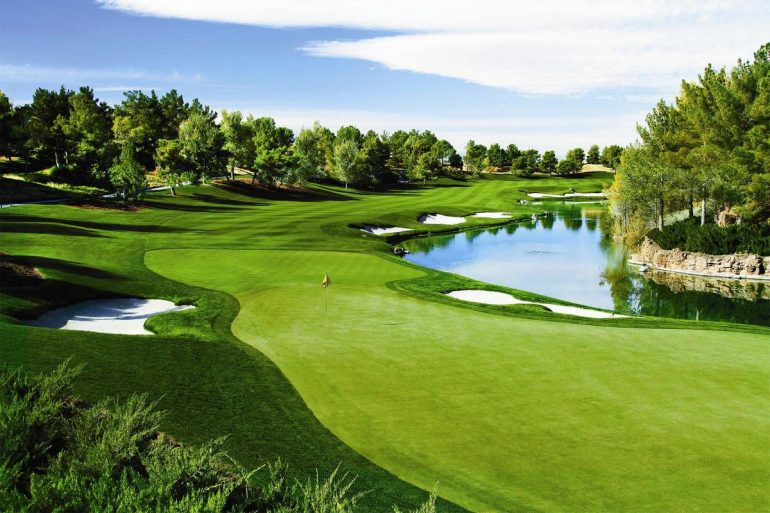 Shadow Creek
The award for the most luxurious golf course in the world has to go to Shadow Creek in the Nevada desert. Designed by Tom Fazio and built by one of Las Vegas’ major casino moguls, Steve Wynn, Shadow Creek cost an estimated £70 million to build and – despite being in the desert – features more than 20,000 trees to ensure complete privacy for players as well as that traditional parklands feel. It was also home to the infamous 2018 matchplay skins game between Tiger Woods and Phil Mickelson.

And here’s the best bit. Say you’re someone who likes to indulge in some betting from home. You might typically play the more traditional table games like roulette, or maybe you like to immerse yourself even further with a live dealer game. Whichever your preference, as a luxury lover, you’ve no doubt considered turning your at-home hobby into a holiday with a trip for Las Vegas. Well, Shadow Creek is available to all guests staying at an MGM Resorts property. So if you take up a room at the Bellagio or Park MGM, you can enjoy a round at one of the most exclusive golf courses.

Golfing luxury does not get any more exclusive than this quintet of courses.

Tags from the story
Golf