There are many essential places to visit in Egypt, the well-known country of the pharaohs and one of the most important ancient civilizations in history. Egypt is without a doubt a trip that marks all travelers and is to see the Egyptian Pyramids and the Sphinx, get to the Temple of Abu Simbel, cruise on the Nile, look for the Tomb of Tutankhamun in the Valley of Los Reyes, crossing the desert or getting lost in Cairo’s Khalili Bazaar are just some of the moments you will never forget.

After a convulsed time of revolts and insecurity, we could say that it is a good time to travel to Egypt, especially avoiding the hot summer months, since time is an added value to this trip.

It is also worth knowing that although the majority of tourists make the trip by agency, it is also possible to do it independently, or by taking local guides.

If you decide to travel to Egypt with an agency for an Egypt vacation, a cheaper and safer option, you can book one of the trips best valued by travelers such as this 8-day all-inclusive or this 11-day trip that also includes the Red Sea.

We have to confess that we have a special affection for Egypt since it was our first trip together and it is one of those destinations that we have in mind to return soon.

Based on the experience of our trip to Egypt in 11 days, we have made a list of what we believe are the 5 essential places to see in Egypt. 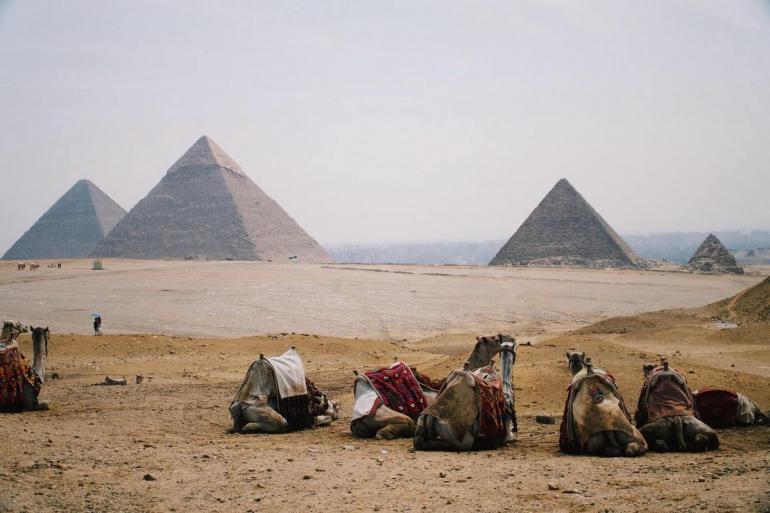 1.The Pyramids of Giza :
The Pyramids of Giza, the only one of the 7 Wonders of the Ancient World that is preserved, is one of the most impressive places to visit in Egypt and also in the world. Located less than 20 kilometers from Cairo, the 3 great pyramids with the tombs of the pharaohs Cheops, Kefrén and Micerinos, stand out above the rest of the country’s monuments and pyramids.

Next to the Egyptian Pyramids is the ever-vigilant Sphinx, with its more than 20 meters high, which together with the pyramids are one of the symbols of the country.

We recommend that whenever possible, visit them first thing (they open at 8 in the morning) since in this way, in addition to avoiding organized groups, you can get one of the few tickets to visit the interior of the Pyramid of Cheops or Kefrén, which should be borne in mind that it is not recommended to enter if you have claustrophobia. 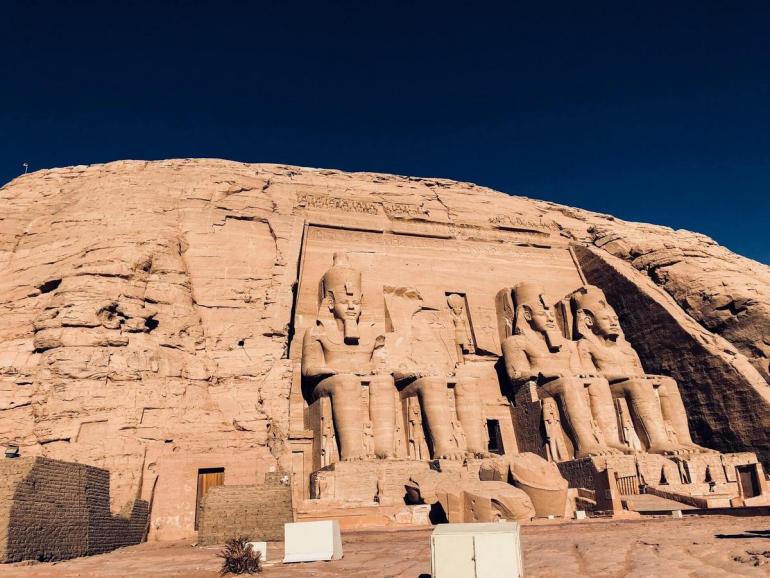 2.Abu Simbel :
In Nubia, southern Egypt, there is a place that beautifully shadows the Egyptian Pyramids, Abu Simbel. This archaeological zone stands out for the two rock-cut temples that the great Pharaoh Ramses II ordered to build in the 13th century B.C. to commemorate a war victory.

These two incredible temples honoring Pharaoh and his favorite wife, Nefertari, had to be moved to a higher location in 1968 as a result of the construction of a dam on the Nile River, making them even more known to the world.

Like the Pyramids, we recommend that you make the visit first thing, to avoid the hottest hours and more people, in addition to taking into account that it can be a good option to stay near the complex, to also enjoy the light show which takes place at night.

To get to Abu Simbel you can do it by plane from Cairo in one day, or by bus or car, joining the convoys that leave from Aswan, where you will arrive after a journey of about 3 hours. 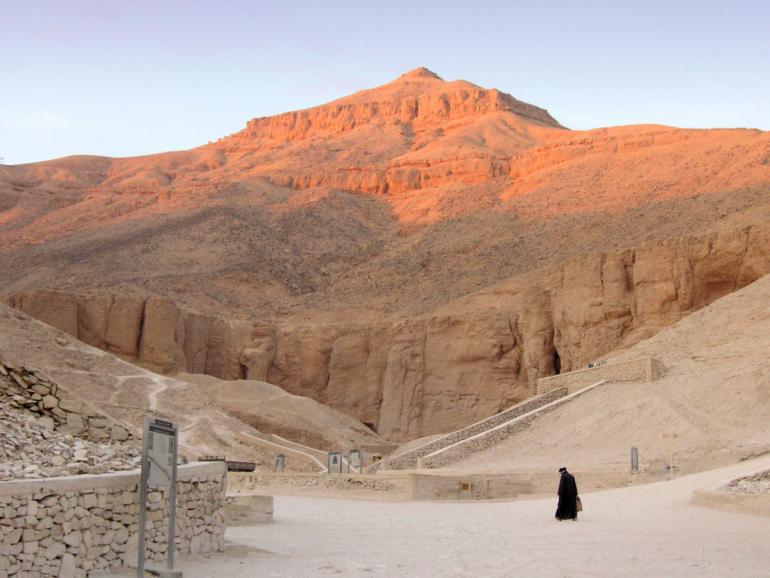 3.The Valley of the Kings :
On the west bank of the Nile, 10 kilometers from Luxor, is the Valley of the Kings, one of the most essential places to visit in Egypt.
This valley became the cemetery for most pharaohs, as well as queens and princes from the New Kingdom era and is made up of two valleys, the East and the West or Valley of the Queens, where more than 60 have been found graves. 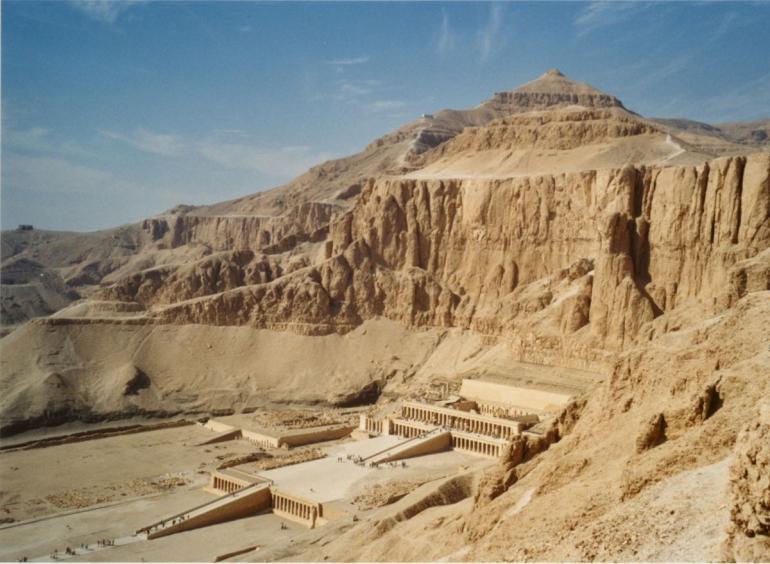 4.Temple of Hatshepsut and the Colossi Memnon :
On the day of the excursion to the Valley of the Kings, it is also recommended to visit the Temple of Hatshepsut, one of the most impressive in Egypt, as well as stopping in front of the imposing Memnon Colossi.

The Temple of Hatshepsut is unique in Egypt, not only because of its design but also because it is dedicated to the only female pharaoh, Queen Hatshepsut. Built by the architect Senemut, it has a part carved out of the rock and an external part with three terraces that stand out above the rest of the country’s monuments.

The reliefs of the temple explain the history of the queen, although many of its mentions were destroyed by her stepson Tutmosis III, for revenge for having robbed her of the reign. Another place that is close to the Valley of the Kings and Luxor is Los Colosos Memnon, which we previously advised you to visit the same day.

These two twins and huge stone figures represent Pharaoh Amenhotep III, who, along with 4 other fallen colossi, presided over access to Amenhotep III’s eternal resting place. 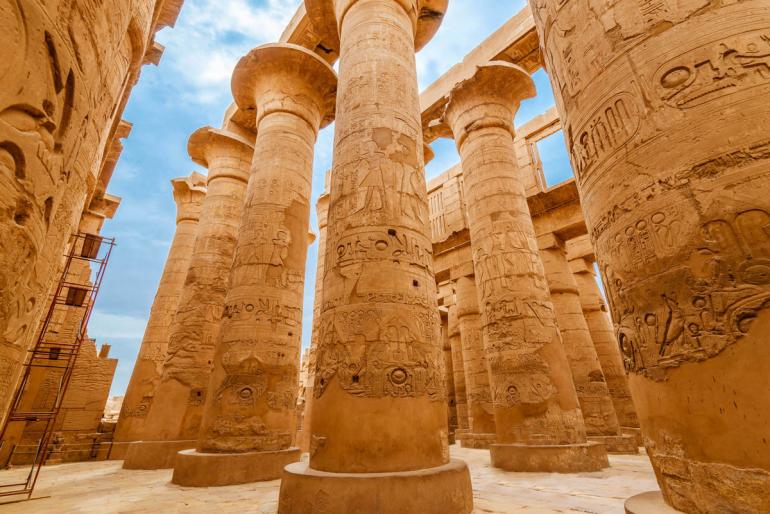 5.Karnak, one of the best places to visit in Egypt :
Karnak is a group of temples located in Thebes, the region that was for more than 1000 years the capital of ancient Egypt, where for 2000 years more than 30 pharaohs were competing and building the best temples and statues in honor of the great god Amun.

This enclosure, formed in addition to temples by chapels, obelisks, statues, and a large sacred lake, is the second most touristic place in the country, behind the pyramids and another of the most essential places to visit in Egypt.

Among all the buildings, the Great Hypostyle Hall stands out, with its enormous columns covered with extraordinary reliefs and hieroglyphs, in addition to the Avenue of the Sphinxes, which united the temples of Kanar and Luxor, with ram-headed sphinxes, of which some at the entrance and it is another of the best-known places in this group of temples.

Tags from the story
Egypt