The USA’s West Coast has got quite a good reputation as they’re often called the best coast. Aside from being a hub for famous music festivals, it’s also home to the world’s largest bookstore, numerous volcanic sites, great food, celebrities, and, of course, the beautiful coasts.

The coastal gems on the West Coast are a treasure trove of rushing ocean waves and golden grains of sand. Such seaside dalliances aren’t just found in one town but on many parts of the coast. Whether you’re planning a day trip or a weekend getaway, many seaside towns will welcome you to their eccentric and peculiar appeal.

Here are five of the most strikingly beautiful coastal towns on the West Coast: 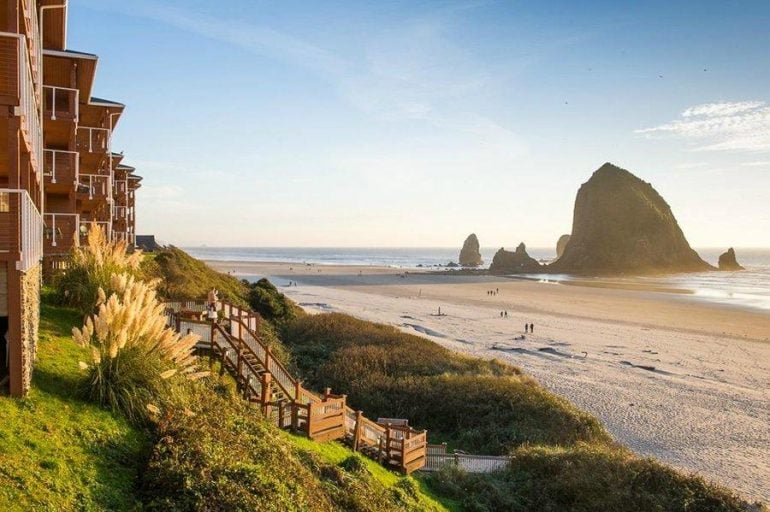 1. Cannon Beach, Oregon
Many towns in Oregon paint beautiful pictures of the state. From the snow-capped mountains to the jagged coasts, the landscapes are all vacation-worthy. Although each town in Oregon shares a picturesque appeal, Cannon Beach seems to outstand all.

Cannon Beach is a small town known for its abundance of activities, beautiful culture, good food, accessible art galleries, and of course, the beach. Aside from that, it’s known for its forested cliffs, towering rocks, and miles of vibrant, pristine beaches. Such abundance made it one of the best coastal towns in Oregon. 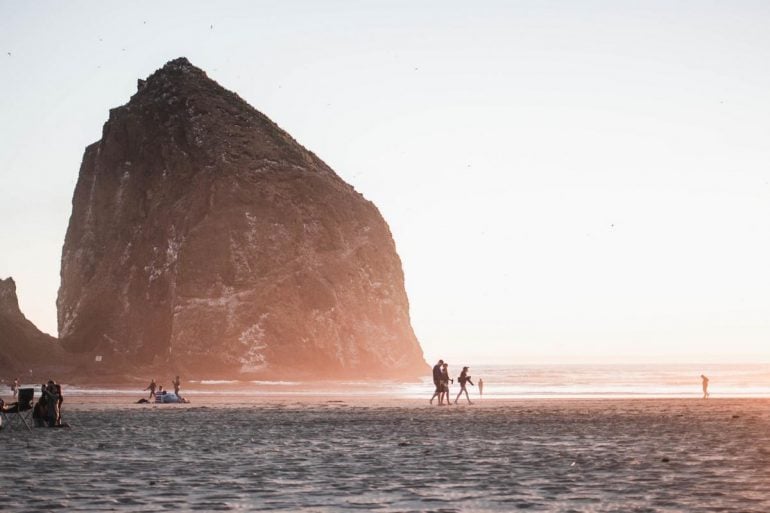 Anyone who arrives at Cannon Beach will never run out of reasons to venture into the town. First of all, the entire beach is nearly four miles. So, whatever beach activity you want to do—basking under the sun, bird watching, sandcastle building, swimming, picnicking—you can do it. Another well-known landmark in Cannon Beach is the massive Haystack Rock, one of the world’s most photographed rocks. It stands 235 feet above the water and is the world’s third-largest monolith.

Moreover, dining around the seaside village is also an adventure. Among the locals’ favorites are the candies from a candy store that’s been in business for four generations, as well as the French Italian cuisines from a restaurant that uses local and sustainable ingredients.

If you’re looking to visit this lovely town of Cannon Beach, you better do it in summer. Besides, accommodations at Cannon Beach can fit every budget. Whether you’re looking for campgrounds, cottages, or coves, many lodgings are wallet-friendly. You might want to consider browsing for Oregon Coast rentals to secure your bookings. 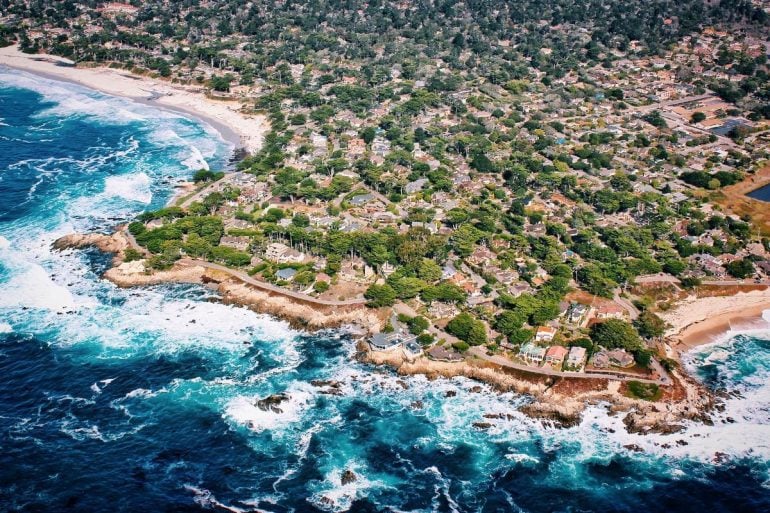 2. Carmel-by-the-Sea, California
Carmel-by-the-Sea, also known as Carmel, is another charming coastal town along the West Coast. This romantic destination is famous for its picturesque shorelines, the alluring ambiance of Victorian buildings, historic Spanish missions, great places to eat, and inspiring art experiences. There’s plenty to do whether you’re traveling by foot, car, or both.

This town has an artistic side, as evidenced by the presence of numerous art galleries. Plus, there’s quite a number of writers and poets staying in Carmel for its elegance and uniqueness. Anyone who takes a stroll around town will most certainly come across bucolic artisan boutique stores, cutesy novel stores, and enticing restaurants. 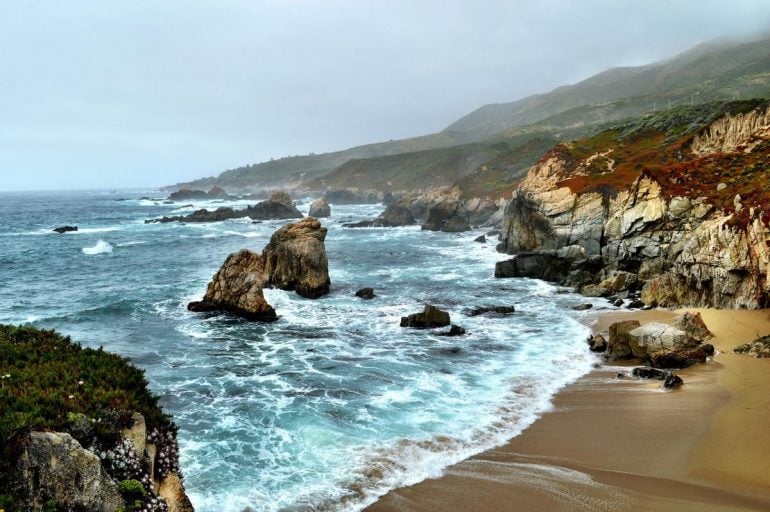 Around the cove at Carmel Bay is a lovely expanse of fine white sand beaches. Although the beach isn’t suitable for swimming, its pristine coastline, rocky cliffs, and crashing Pacific waves give a secluded feel, along with the iconic cypress trees that add interest to the scenery. But for those who like a good swim, they can always go to Pebble Beach. 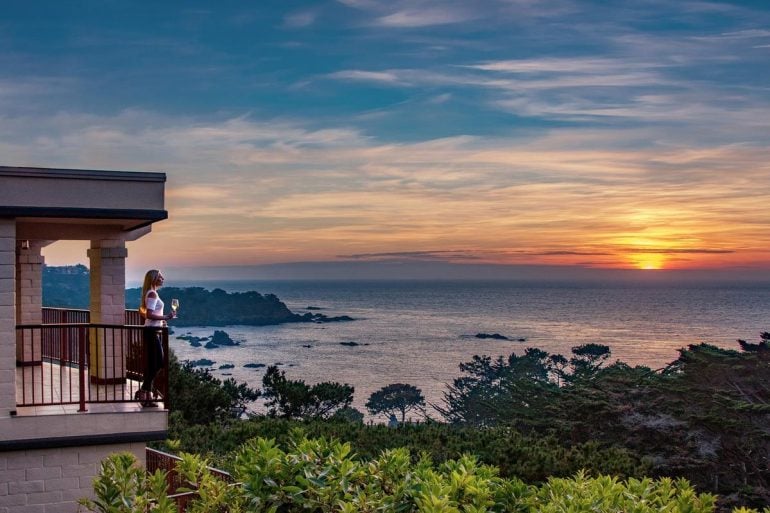 Other spectacular charms in the town of Carmel include the fairytale cottages built in the 1920s as well as the many hidden passageways and serene garden courtyards. With these, visitors can happily wander around and surprisingly end up in cafes and boutiques through the nooks.

The free-spirited aspect of Carmel-by-the-Sea inspires visitors to go sightseeing, participate in art festivals, or simply sit on the benches in parks. Indeed, it’s a charming town with a variety of scenic attractions to offer its visitors. 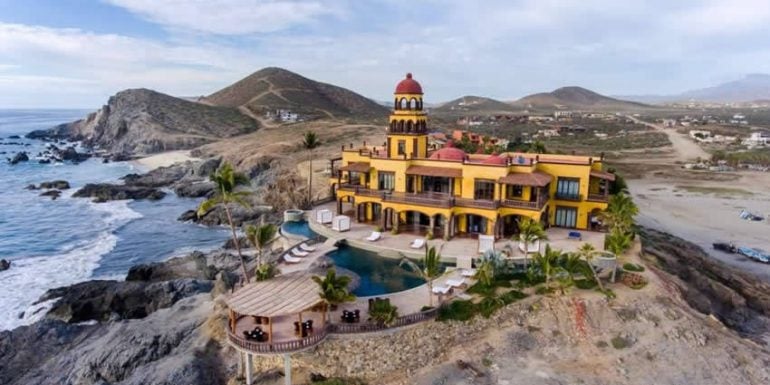 3. Todos Santos, Mexico
The great Todos Mexico is a metaphor for the adage that says, ‘In every walk with nature, one receives far more than he seeks.’ It’s a place where a slow adventure of its roads produces a treasure trove of discoveries. With the expanse of palms and fruit trees, fields of agricultural production, and the miles of unspoiled beaches, Todos Santos is indeed a natural paradise.

Todos Santos also referred to as a magical town, has continued to grow in popularity. Visitors come for various reasons: to surf near the area, walk along the cobblestone streets surrounded by small artisan stores and refurbished manors in the ancient towns, or simply laze around in their hotel rooms. 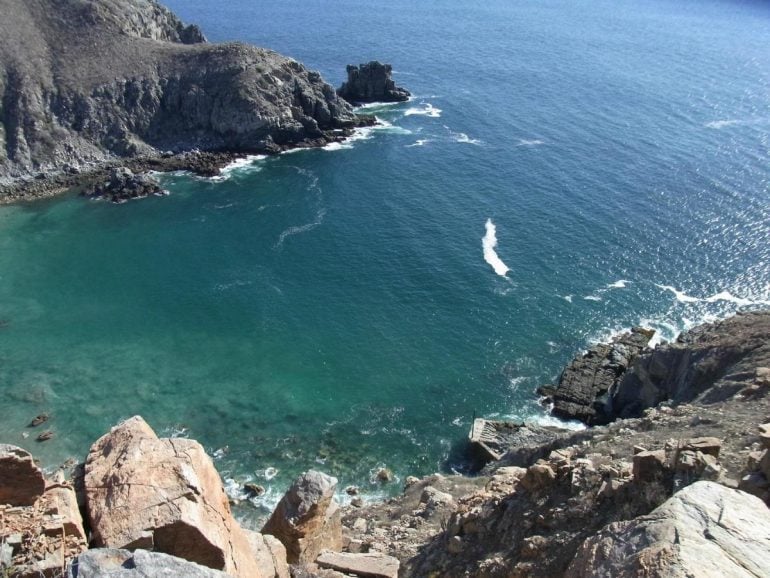 Todos Santos is so magical that the Mexican government declared the town as a ‘Pueblo Mágico’ in 2006, making it one of only 100 towns to receive this distinction for retaining its natural beauty, historical significance, and cultural opulence. And because of this, travelers from other parts of the world are setting their sights on Todos Santos. 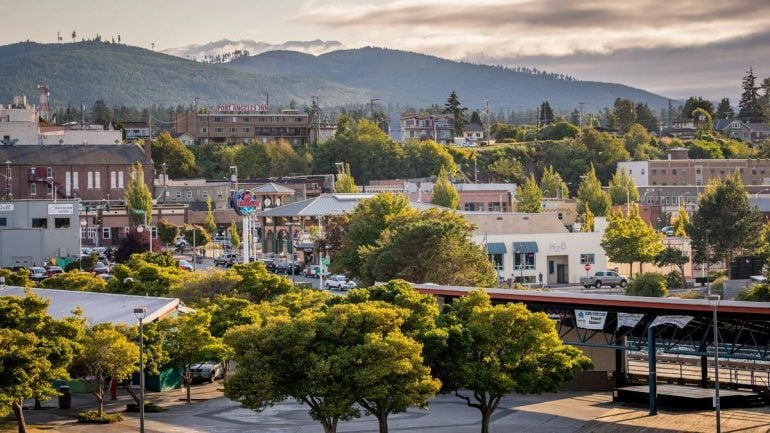 4. Port Angeles, Washington
Port Angeles, situated on the Olympic Peninsula’s northeastern stretches, is nationally viewed as one of America’s finest small towns for a reason: it has a little bit of everything. Although some of the visitors come here for Olympic adventures, most still keep coming back for its friendly people and culture.

Port Angeles has plenty of beaches. You can explore coasts, particularly the calm water bay of the Strait of Juan de Fuca, which is perfect for tide pooling, snorkeling, paddle sports, and fishing. In addition, the town is one of Washington’s most bike-friendly destinations.

Moreover, everyone can be merry with the many restaurants, clubs, and diners around Port Angeles. You can find farm-to-table cuisines, classy microbreweries, freshly caught seafood, and popular pubs. Indeed, eating and drinking can be adventurous, too! Apart from those, the lovely downtown and waterfront stores also await. You can try hunting for artistic keepsakes and artifacts from the past or find rugged but fashionable clothes for outdoor adventures.

Port Angeles has a plethora of cultural offerings, too. Not only are there art murals and sculptures everywhere across town, but there are also monthly and annual events that highlight the artsy side of this tiny town. Since art galleries and numerous street art pieces can be found throughout the city center, no one could miss them. There’s just so much to explore in Port Angeles! 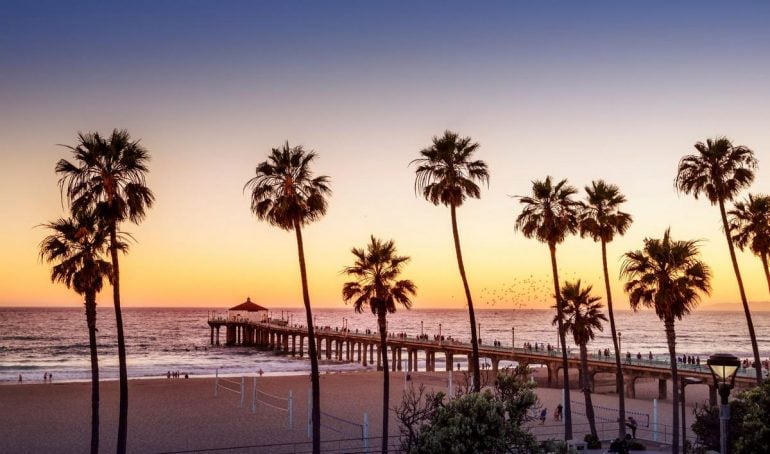 5. Cayucos, California
Cayucos is a tiny coastal town situated on the Central Coast of California, directly off the Pacific Coast Highway. Cayucos is the kind of place where anyone can escape the stresses of everyday life. It’s where life slows down, and it’s a town where problems disappear together with the crashing waves on the beach. In addition, anyone who visits here might even feel like they’ve taken a few steps back in time as if they were brought into the Old West.

The word ‘Cayucos’ is derived from the Chumash Native American word for ‘canoe.’ Although there are two other beach towns nearby, Cayucos stands out for its uniqueness and distinctiveness.

Regardless of the size of the town, there’s always something for everyone. Here’s a list of things anyone can do:

Go surfing. Surfing is among the classic coastal town activities in California that everyone should try. Whether you’re a surfing expert or not, you can look for shops where you can find surfer dudes to guide you.

Take a self-guided mural tour. Cayucos has nine gorgeous murals scattered all across town. And since it’s a small town, visitors can just put on some walking shoes to go on a tour by themselves.

Take a stroll along the pier. The pier in Cayucos was initially built in the year 1872 by Captain James Cass, the founder of Cayucos. It helped Cayucos develop by enabling early residents to trade goods.

Hunt for antiques. Cayucos is home to many great antique stores and souvenir shops. Aside from that, the stores sell handcrafted items, bazaar finds, and spectacular home goods, too.

Celebrate their festivals. Cayucos hosts many excellent festivals each year: the Sea Glass Festival to see the Mermaid Ball, the Polar Bear Dip that’s celebrated on New Year’s Day, and the Antique Faire, wherein the street of Cayucos will be filled with vendors.

Ride a Clydesdale. There’s only one place in the country where you can ride giant Clydesdale horses, and it’s found in Cayucos. A Clydesdale’s six-foot-high perch offers a panoramic view of the ranch and the nearby mountains.

As you’ve read, Cayucos does have that vibe anyone is looking for. Everything is easily accessible on foot, and the beach is just a few blocks away. So, whether you’re just visiting for a day or staying there for a week, you’ll surely delight yourself with many things to do. 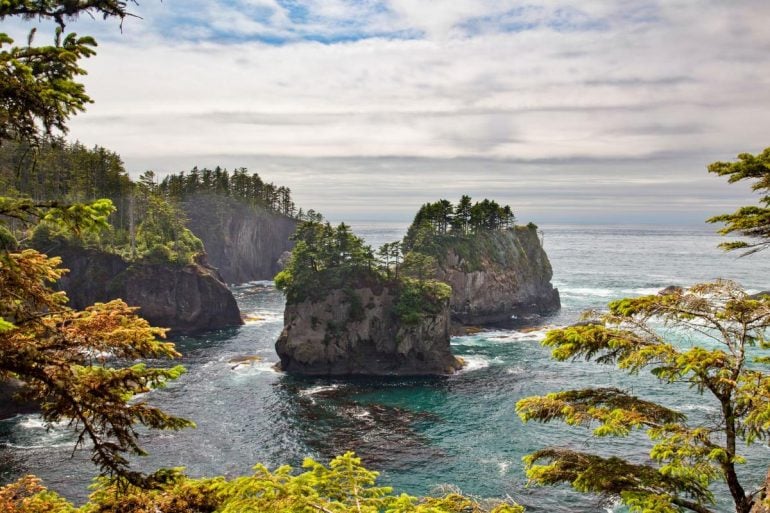 Final Thoughts
The West Coast has got unique and noteworthy features. Filled with fantastic towns, incredible parks, and lovely beaches, you’ll likely get overindulged in the places to explore. So, if you’re planning on venturing the seaside escapades on the West Coast, take note of the many things to do, diverse foods to eat, and the best places to visit to get the most of your adventure.