YouTube celebrity Casey Neistat gave his followers an insider’s look into Emirates’ ultra-luxurious First Class Suites. Neistat made the trip from Brussels to Dubai on board the airline’s 777 Boeing while documenting the experience for his 8 million followers. He must have paid a pretty penny for the trip seeing as the cost of a one way trip in a suite starts at $9,300, but Neistat is not new to reviewing luxury services and he had plenty to say about his trip. 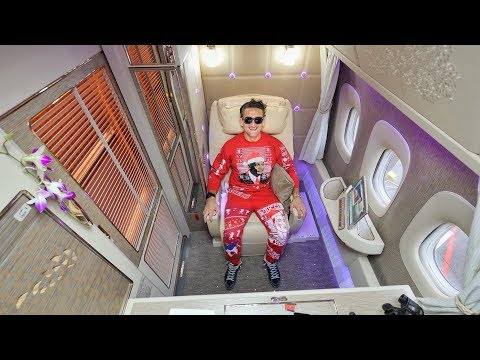 Once he was led to his seat, the YouTuber gave his audience a quick look at the amenities and the space afforded to him. The suite consists of a reclining seat that can be converted into a lie-flat bed. The suite’s extras include two closets, two TVs, a fold-up vanity mirror and even a little snack bar.

“This feels more like an extremely elegant hotel room than it does an airplane seat” he said adding that the legroom borders on ridiculous. He must have been thinking of his economy seat days and comparing them to his present high flying lifestyle.

Keen to test out every service offered, he video called room service and enjoyed a restaurant-style multi-course meal.

Of course, he wouldn’t be a YouTube celebrity if he didn’t push the boundaries a little. Neistat attempted to fly his drone in the small plane but quickly gave up when things didn’t quite go according to plan.

He also tried to skateboard inside the plane but I guess they let you do that when you pay upwards of $9,000 for your spot.