Koi fish have always been associated with prosperity, good fortune and overcoming adversity, but luxury jeweler Van Cleef and Arpels has reinvented the carpe in sparkly new avatar. The Carpe Koï watch bracelet might just be the most elaborately detailed watch you’ve ever seen! Designed to resemble the famous carpe fish, the watch is a 3d marvel, covered with 8,000 colored stones including yellow sapphires and spessartite garnets set into the yellow gold scales as well as white diamonds and blue tourmalines that form a spray of waves. Its eyes are bright orange garnets enhanced by black spinels. The watch is secured by a clasp hidden in the tail. 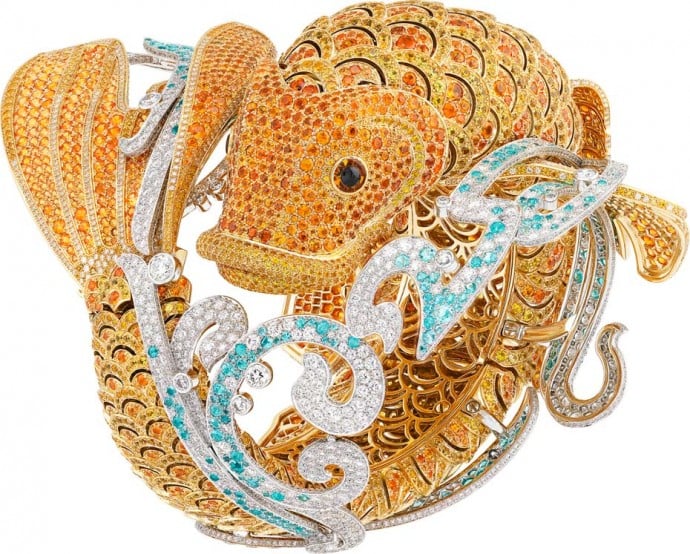 This endeavor by Van Cleef and Arpels cannot be anything but a labor of love, as a mind boggling 3,450 hours were put into its creation, in fact, at first glance you cannot even tell it is a watch as there is no dial in sight! Only when you open the koi fish’s mouth do you see the concealed watch face with princess cut diamonds serving as indices against a backdrop of sparkling yellow sapphires and spessartite garnets. A quartz movement allows the wearer to track the passage of hours and minutes. 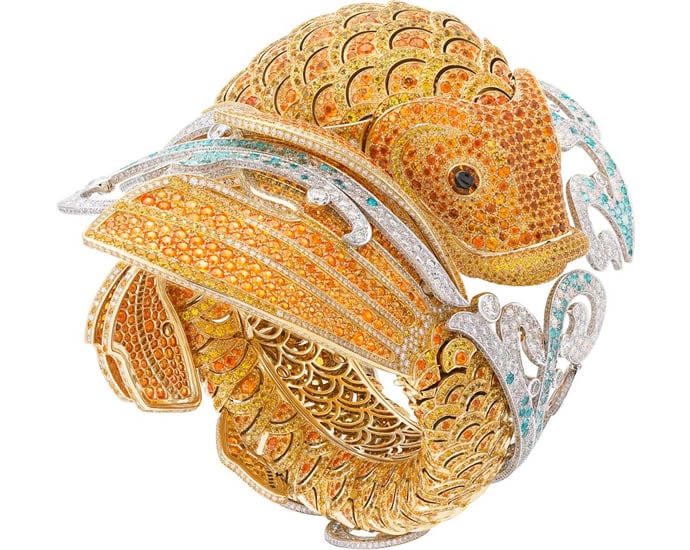 Though Van Cleef has given us stunning timepieces before, it is safe to say that with the Carpe Koï watch bracelet, the yardstick for excellence and luxury has been redefined. The watch made its debut at the Salon International de la Haute Horlogerie (SIHH) but we’re hoping that its second outing will be at the much-anticipated Academy awards. With stylistas like Emma Stone, Reese Witherspoon, Keira Knightley and Marion Cotillard among the nominees, some scene stealing arm candy wouldn’t be out of place!