The man behind The World’s Most Expensive Watches book is a happy man. And he has every reason to be. Ariel Adams, founder of the hugely successful watch blog and website aBlogtoWatch.com has penned his first book, that deserves a place on every man’s coffee table or bookshelf. The book presents some of the most extravagant timepieces starting from $200,000 that every gentleman needs to indulge in, at least once in a lifetime. 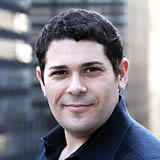 In his book, Ariel Adams picks 102 of truly exceptional timepieces from the last decade, mostly new watches and some classic models that sold for stellar amounts at auction. After some hands-on time with Ariel Adams, he fills Luxurylaunches in with how the value of a watch construes the relevance of craftsmanship and complexity of design as well as the importance of exclusivity, prestige and collectability.

Here are the excerpts from the interview:

The World’s Most Expensive Watches book covers watches starting at $200,000 and above. How did you select the watches to include in the book as the watch industry frequently introduces models at this price and above?
After deciding that $200,000 was a good threshold price for an “expensive watch,” I first needed to personally reconcile with the fact that there was no possible way of including ALL the $200,000 plus watches in a single book. The funny part of course is that there are SO many watches priced at this level. With the idea of having about 100 watches in the book, it all came down to narrowing the focus. One thing that I felt strongly about is that the most modern watches are probably the most interesting.
After coming up with a list of around 200 watches it became clear that I needed to select those pieces that really helped illustrate what you can expect with a $200,000 plus timepiece. That also meant making sure that the most important brands were represented, and also that no company was too disproportionately mention in book. Working with the list and having to make selections really allowed me to realize that only someone with a lot of knowledge about watches, how they are made, and what gives them value could have even attempted at putting such a list together.

Seeing The World’s Most Expensive Watch hands-on allowed me appreciate how interesting the final selection is, and I feel confident that pretty much anything you might expect to see in an ultra-high-end watch is represented in the book.

Ariel’s book is available on Amazon.

Tags from the story
Interview, Most-Expensive