The year 2010 will always be a special year for Audemars Piguet. The year marks the 135th anniversary of the famed watch manufacture. Audemars Piguet Japan held a grand event to celebrate this great achievement to celebrate the Audemars Piguet 135th anniversary and a new product launch party in the “Choice!” restaurant on the third floor of the city’s Ark Mori building. Various historical watches representing 135 years of history were specially flown in from the Audemars Piguet Museum in Le Brassus, to be displayed at this event. Guests were also greeted by the two brand founders Jules-Louis Audemars and Edward-Auguste Piguet, who appeared in a hologram and spoke about their brand’s history. The event also witnessed an exceptional and powerful chronograph that celebrates its 135 glorious years and commemorates it’s a brand ambassador and Formula 1 racer Jarno Trulli. The new chronograph, the “Royal Oak Offshore Jarno Trulli” Chronograph, is a limited edition creation that is sure to become a collector’s favorite and a must-have piece of memorabilia for Jarno Trulli fans.

Powered by a self-winding caliber 3126/3840 self-winding movement, the timepiece has a power reserve of up to 60 hours. A beautifully embellished creation, this timepiece’s main plate is circular-grained, while its bridges are rhodium-plated, chamfered, sailed, and adorned with Côtes de Genève motif. The Cermet bezel, crown, and pushers and the sapphire crystal back are in sandblasted titanium. Engraved on this timepiece’s case is the inscription: Royal Oak Offshore Limited Edition Jarno Trulli.
The anthracite grey dial features an exclusive “Méga Tapis Serie” motif, silvered counters, applied hour-markers, and hands made in white gold with red luminescent coating, silvered inner bezel ring. The strap is black rubber with a sand-blasted titanium folding clasp.
The limited edition chronograph is restricted to only 500 pieces and will be available from October 6th from the Audemars Piguet Boutique located in Tokyo’s Ginza shopping area. The watch will initially be available in Japan only and be released worldwide by the end of the year. 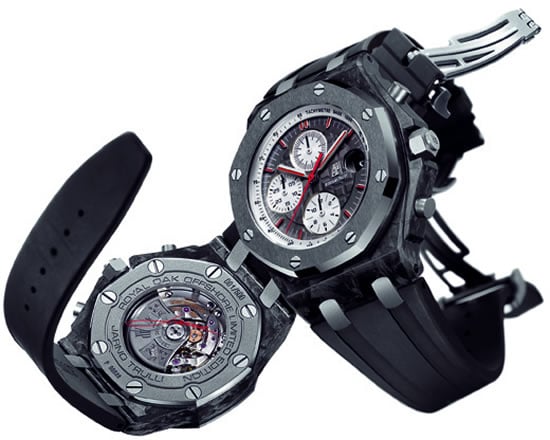 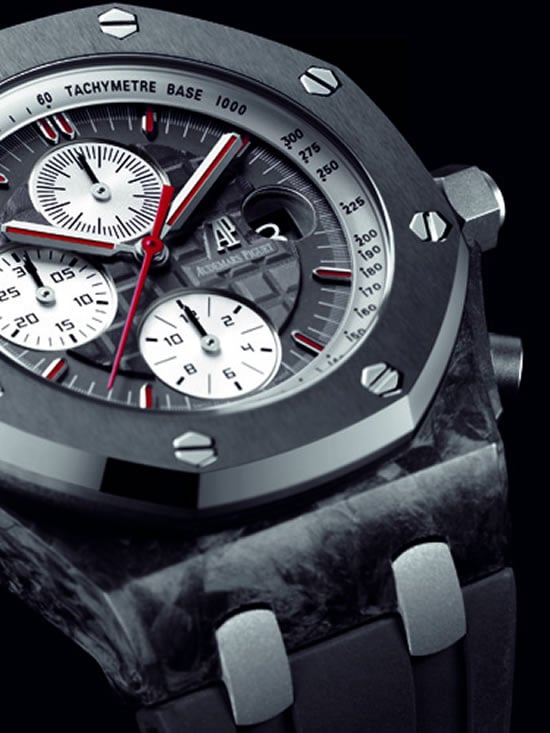