Unveiled at the 2013 Basel World Show, the Arnold & Son Ultra-Thin Tourbillon Escapement (UTTE) timepiece is considered to be the world’s thinnest tourbillon watch available in the market currently. But, Bulgari has snatched away the title from the Arnold & Son UTTE watch by introducing its new Bulgari Octo Finissimo Tourbillon timepiece at this year’s Basel World which has a movement thickness of only 1.95 mm and a case thickness of a mere 5 mm. Finissimo is Italian means ‘very thin’ and the elegant watch bears strong resemblance to its larger sibling, the Bulgari Octo. There is no doubt that this new timepiece is a new milestone in the manufacture’s endeavor to develop ultra thin watches.

To achieve this horological feet, Bulgari came up with a number of groundbreaking technical solutions to reduce the overall thickness of the movement. The one-minute flying tourbillon cage which is also the thickest part of the entire construction is an integral factor in the construction of an ultra-thin tourbillion. The ultra-slim movement has two bridges, one for the minute wheel and one for the gear train of the tourbillon cage. Instead of jewels, ball bearings have been used for many of the moving parts. The Bulgari Octo Finissimo Tourbillon caliber is made up of 249 components and watch’s octagonal case is made of platinum and measures 40 mm in diameter. The watch has a lacquered and polished black dial and comes with a black alligator leather strap with a buckle of platinum. The pricing and availability is yet to be announced by Bulgari. 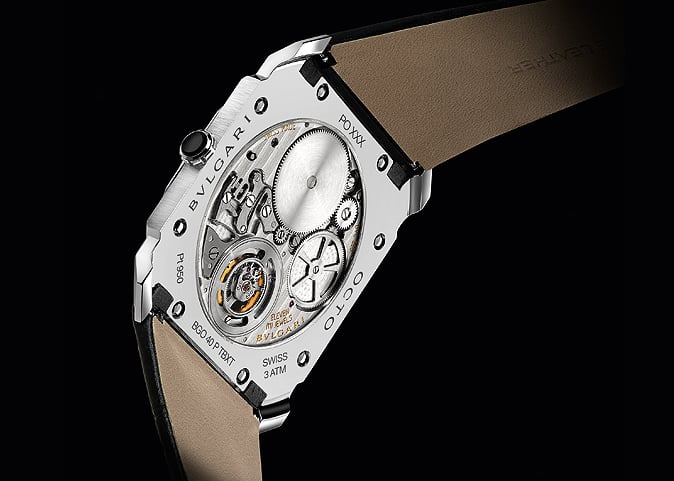