Last year, Bovet introduced the incredible Récital 26 Brainstorm Chapter One timepiece. The watch packed with horological technicality was dedicated to astronomy and featured an unusual sapphire crystal case. The Swiss luxury watchmaker has followed it up by debuting the latest Récital model – the Récital 26 Brainstorm Chapter Two. A direct evolution of the award-winning Récital 22 Grand Récital from 2018, the new timepiece is a celebration of horological engineering and hand finishing. Although the Chapter Two watch continues with the same basic layout, it focuses on time-zone displays instead of concentrating on astronomical complications like the Récital 22. The case made of synthetic sapphire features the unusual design with a distinct slope from top to bottom. It is inspired by the sloping angle found on antique writing desks. It has a diameter of 47.80mm and measures 15.50mm high at the thickest point. However, Bovet says the use of sapphire makes it lighter despite its considerable size as the material is actually lighter than titanium. 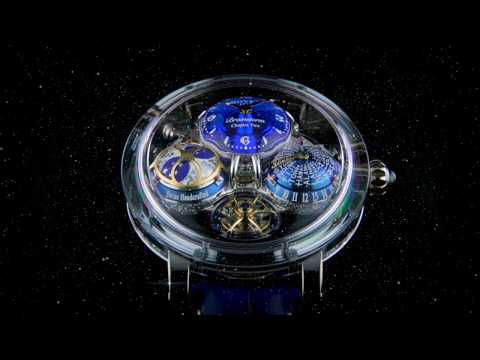 Housed inside the transparent case are concentric rollers, rotating domes, and three-dimensional indicators that offer a three-dimensional layout. At 12:00 is an eye-catching translucent blue dial that shows time. Directly below it is a double-face flying tourbillon which functions as the seconds hand of the watch. It also has the same stylized Sun design as the tourbillon used on the Récital 22 Grand Récital. At 9:00 is a rotating dome that shows the moon-phase in both the northern and southern hemispheres. And opposite to it is another rotating dome that displays the time in a second time zone. It is inscribed with the names of 24 cities representing the 24 time zones. The revolution of the two domes is taken care of by a patented radial guidance system that has mini ruby rollers which are seated on the circumference of each dome. The power reserve indicator is located at the top part of the case nestled between the two lugs. Bovet will produce only 60 movements for the Brainstorm Chapter Two spread across the three dial variations in blue quartz, green quartz, and blue aventurine. As is the tradition with Bovet’s high complications, collectors can order bespoke and custom versions. The Récital 26 Brainstorm Chapter Two is priced at $383,000.

Tags from the story
Bovet