Diamond encrusted dials and precious metaled straps may soon be passé, with meteorite watches now hitting the world of horology like a fresh storm. After Jaeger – LeCoultre’s Master Calendar and Parmigiani Fleurier’s Tonda 1950 Meteorite, it is time for De Bethune to present its own version of a classy Tourbillon Meteorite. The cosmic rock used by the Swiss manufacturer for this novel collection is one sourced from the meteor graveyards of Santiago del Estero, Argentina that were unearthed by scientists early last year. 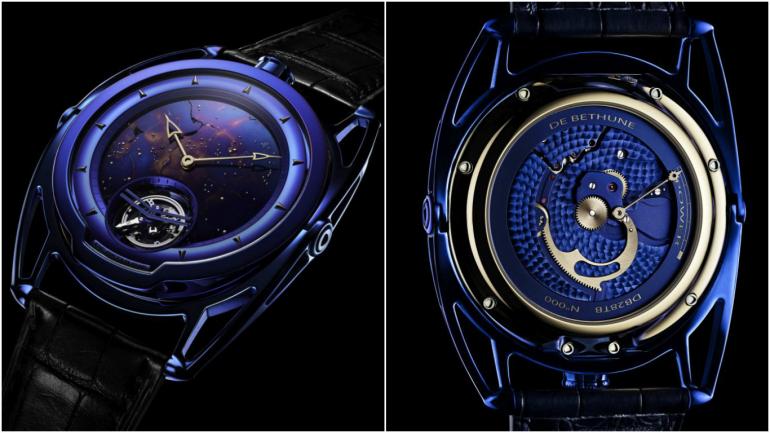 Titled as the DB28, the luxe watch features a deep blue disc in place of a regular dial, which is formed from a heated alloy of iron and nickel that predominantly makes up its muse. The case, in blued and hand-polished titanium, measures 42.6mm x 9.7mm and is water resistant to 30 meters. It also showcases a double AR-coated sapphire crystal within it. Further, its screwed case back comes in polished 18 karats rose gold as can also be seen on the watches’ linear power reserve indicator and its hands. In drawing further inspiration from its cosmic stimuli, the dial for the DB28 pictures a star-studded sky in blued hand-polished iron meteorite with white gold stars.

The beautiful masterpiece further offers 5 days of power reserve, as shown by the power reserve indicator on the case back and a movement that beats at a frequency of 36,000 vibrations per hour. De Bethune’s creation sits perfectly on an extra-supple alligator leather strap with alligator padding and a mirror-polished and blued titanium and 18kt rose gold ardillon buckle. It is priced at a shattering $277,940, which though pricey, seems in absolute accordance with the mastery and meteorite tapping that has gone into its making. If you would like to own a unique piece of the universe as your watch (who wouldn’t!), the DB28 is just what you need!