Every year at the SIHH show, we expect to see the best examples of the achievements in the science of horology and spoil ourselves just appreciating the genius of high-end watchmakers. Greubel Forsey has come to champion the craft only in just 10 years of their existence and sit comfortably at the pinnacle. With most of their creations commanding a price in the close proximity to a million dollars, their timepieces defy the existing definition of uber-exclusive. At the on-going 2014 SIHH show, Greubel Forsey introduced their newest creation, the Double Tourbillon Technique 30° Bi-color, which is a reinterpretation of their Double Tourbillon 30° watch which had a more classic architecture.

Unlike the original Double Tourbillion 30° which was available in gold or titanium versions, the new bi-color edition will be available in 5N red gold and platinum casing with deep black chrome finish of the movement. Greubel Forsey has limited the number of timepieces to only 22 examples for each version. This new timepiece offers amazing contrasts between the platinum/5N red gold of the case and the deep black chrome finish of the movement which amplifies the beauty of the watch. The case measures 47.5mm x 16.8mm and has side plates in titanium with black Amorphous Diamond Like Carbon (ADLC) coating recounting the story of the inventors and both crystals are synthetic sapphire. But the center piece of watch is the Double Tourbillon 30° at 6 o’clock beating at 21,600 vph. Its first carriage rotates horizontally in four minutes; its second, inclined at 30°, goes around in one minute making it a phenomenal timepiece. There is no word on the price but it’s expected to be in the range of $500,000. 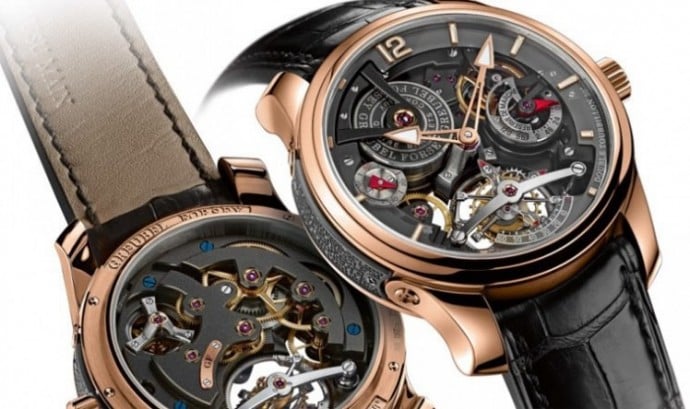 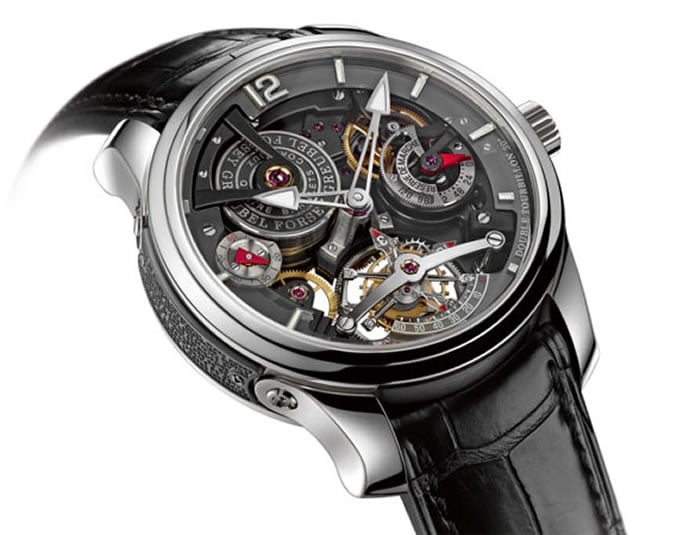